Jessy challenges that answer “Robins are not generally known for ‘treating’ on young birds.” Based on what she was seeing outside her window, she suggested that the birds may actually be sharing the nest. “I have a robin’s nest with two young and one robin egg (until all the feathers come in I cannot be sure who the young belong to). It is always the robin I see on the nest during the day, but the cardinal male brings food to the nest. The female cardinal and male robin are also about frequently, but are more skittish and I cannot yet determine their roles.”

The Discussion: Jessy makes a valid point in that eating baby birds is probably not a regular habit of American Robins (Turdus migratorius). However, most birds are opportunistic, and robins have been documented eating fish and snakes and even a shrew, so it doesn’t seem a stretch that they would eat a baby bird if given the chance. And though I had not heard of different species of birds truly sharing a nest, who knows what behaviors might be out there that we don’t yet know about. (We’re not, of course, talking about nest parasitism, such as is practiced by cuckoos and cowbirds, where females of one species lay eggs in the nest of another species and then abandon them to let the second species raise the chicks.) 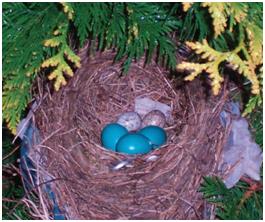 With help from Jessy, I was able to find a source that described an incident of nest sharing between American Robins and Northern Cardinals (Cardinalis cardinalis). The authors of a 2009 article in the Wilson Journal of Ornithology observed a female robin and a female cardinal alternating at a nest where both laid eggs. This photo of the nest, in an arborvitae bush in a suburban neighborhood in Iowa, clearly shows three blue robin eggs and two speckled cardinal eggs.

The authors detail their search of the scientific literature for similar cases, and mention reports of sharing between two female cardinals and even a case of a cardinal feeding American Robin chicks. They state that “American Robins, however, are less tolerant of nest violations, generally rejecting Brown-headed Cowbird eggs, and have not been observed to exhibit intraspecific cooperative brood care.” They go on to say that actual nest sharing between two different species of birds is not common. One documented example, however, noted a tree cavity nest that included nestlings of both Red-breasted Nuthatches and Mountain Chickadees, after adults of both species were seen bringing food to the tree hole nest.

The rest of the brief article describes observations of the interactions between the birds at the shared nest. Apparently, the two females shared the nest fairly peacefully at first, but the interactions became more aggressive over time. The female cardinal would sit on the female robin’s back “… and scratch and kick until the robin fled the nest.” Eventually, the eggs began to hatch, with the result that two fledglings were seen, which turned out to be robin chicks. One cardinal egg was found on the ground and the other disappeared.

The authors suggest that scarcity of good nesting sites in this area might have led to the birds competing over that site, a contest that was eventually won by the robins.

Over the course of several days, Jessy monitored the joint nest in her yard and kept me updated by email. She wasn’t able to see whether there were eggs from both species, but as in the case documented in the Wilson Journal, the two eventual hatchlings were robin babies, as far as she could tell. The adult cardinals continued to hang around, and Jessy saw the male bringing food to the area of the nest, although she was unable to see if he was feeding the chicks or his mate. At one point, she noticed one of the hatchlings on the ground beneath the nest and she replaced it. A few days later, there was only one chick in the nest and shortly after that, Jessy found a dead chick on the lawn. She also found part of a wing of an adult bird, possibly a robin. The nest was empty and all the other adults were gone.

Jessy’s speculation is that a cat or raccoon or other predator might have ended the experiment in joint parenting.

So I guess I should modify my original answer about a robin hanging around a cardinal nest. I still think a good possibility is that a robin around a cardinal nest might be looking for unattended hatchlings to snack on. But another possibility is that it may be trying to compete for the nest. Unfortunately for the cardinals, in the two examples we have, that doesn’t seem to go well for the cardinals.

What is this Dr. Seuss flower?

What is chasing these birds?