Is a Daddy Long Legs a Spider? 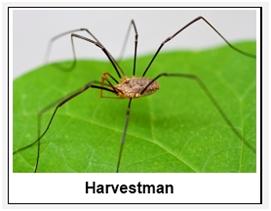 The Short Answer: Most likely the answer is “no.” But I’d need to know exactly what you are calling a “daddy long legs” to be sure. The animals most often called daddy long legs in the United States are the harvestmen, arachnids in the order Opiliones. Harvestmen have eight legs and therefore look superficially like spiders, which are also arachnids. But saying that Harvestmen and spiders are both arachnids is like saying that a cockroach and a butterfly are both insects. Or that a barnacle and a lobster are both crustaceans. Despite both having eight legs, harvestmen and spiders are not very closely related. Harvestmen can be distinguished from true spiders in that spiders have two major body sections. In harvestmen, all the body segments are fused into one oval body section. 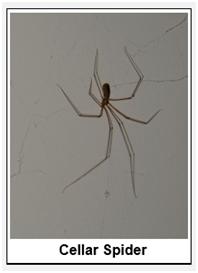 Harvestmen also differ from spiders in that they don’t produce silk and so don’t create webs at all. Like spiders, they are predatory, but rather than wait in a web as many spiders do, harvestmen hunt on the move.

There are two other common animals that are sometimes called daddy long legs. One is the cellar spider (Pholcus phalangioides), which has been introduced all over the world and now inhabits the corners of rooms from Australia to Europe to North America. The cellar spider has a relatively small body and long legs, so it looks similar to the harvestmen. It, however, is a true spider, so if what you were calling a daddy long legs is a cellar spider, then the 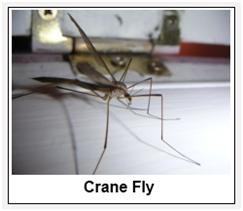 Finally, there are parts of the world where crane flies are called daddy long legs. Crane flies, which look vaguely like giant mosquitoes, are in fact, insects, which you can tell by counting their six legs. Spiders have eight. The other clue that you are dealing with an insect is that crane flies have wings. Of the arthropods, only insects have wings. So if what you saw is a crane fly, the answer is “no.”

More Information: This evolutionary tree (taken from the Tree of Life website) shows 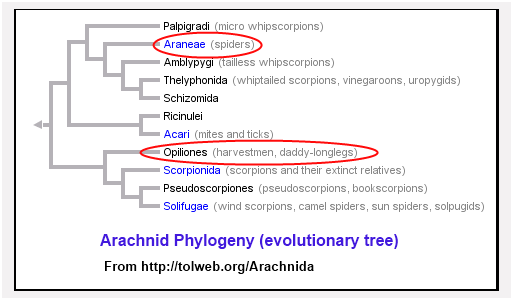 the relationships of the major groups of arachnids. If you look closely, you’ll see that there are two major branches in the tree, and harvestmen and spiders are not even on the same major branch. In fact, harvestmen are more closely related to scorpions than to spiders. And spiders are more closely related to ticks than they are to harvestmen. So the similarity in looks can be deceiving.

Left holding a leg: One of the interesting things about harvestmen/daddy long legs is that they deliberately lose legs. If a predator grabs a harvestman’s leg, the harvestman simply releases the leg and runs away, leaving the predator holding the twitching limb. The dropped leg may continue to twitch for 30 minutes. Males also lose legs in fights with each other over females. Losing a leg is a fairly frequent occurrence in the life of daddy long legs. In one study, nearly half the daddy long legs sampled were missing one or more legs.

Unlike many other animals that practice “autotomy,” the dropping of limbs or tails, harvestmen don’t grow legs back. So giving up a leg to a predator or a rival is a permanent act, although losing one or two doesn’t seem to carry too high a cost. According to a study done by Cary Guffey at the University of Southwestern Louisiana, daddy long legs that had lost one or two legs didn’t show much loss in speed or ability to catch prey. It wasn’t until there were three missing limbs that there was a major drop in running and sensing ability.

A biology joke: Reading about the study of harvestmen with missing legs made me think of the old joke about a scientist who was studying the ability of frogs to jump. He put a frog on the lab table and startled it by yelling, “JUMP!” The frog jumped four feet, which the scientist recorded in his notebook. The scientist then cut off one leg of the poor frog and repeated the experiment. “JUMP!” he shouted. The frog jumped three feet, and the biologist noted that result in his book. He repeated the experiment after removing another leg, and then another. With only one leg left, the frog barely jumped one foot. Finally, the scientist removed the final leg and put the frog on the table. “JUMP!” he shouted. The frog didn’t move. Again the researcher shouted, “JUMP!” but nothing happened. With a shrug, the scientist wrote in his notebook, “Frog with no legs cannot hear.”

By the way, while harvestmen have eyes, they seem to sense their surroundings primarily by touching. If you watch one walking, you’ll see that it uses its legs, especially the second set, to probe around it. So if you removed all the legs of a harvestman one by one, you might legitimately conclude “Daddy long legs with no legs cannot see.”

What is this bird with a long white tail?

What is this Fluorescent Green Beetle?