Why did these coyotes attack?

The Longer Question from Jessie: “I live in central Arizona, and was out walking my three dogs on a rarely used trail at approximately 8:30 a.m. Part of the trail passed by a pool of water, which is rare in the area I was hiking in. As I was passing, a coyote appeared about 30 feet away and started vocalizing and making itself as visual as possible. I stopped for a few seconds, expecting it to run away as has happened with every other encounter I’ve had with a coyote.

“Instead, approximately eight other coyotes silently circled in and tried to attack us. They were lunging within four to five feet of my dogs and I. My dogs were terrified and just froze, so there was no aggression on their part. I started yelling and throwing rocks at the coyotes, but they had no fear. I am on the short side and only weigh 70 lbs, so that may have been a contributing factor.

“We somehow broke out of the circle, but they continued to follow us for about ten minutes. Two or three would emerge from the junipers, backs hunched and vocalizing while the rest of the pack positioned themselves to emerge somewhere ahead of us on the trail. They were quite brilliant in their strategies.

“Is this typical coyote pack behavior? Is it strange to have such a large pack? Were they trying to hunt us or were they just protecting a rare source of water in the middle of the desert? I’ve only ever seen coyotes as lone individuals, or in pairs, and they’ve always been timid.”

The Answer: Jessie’s description of facing these coyotes (Canis latrans) sounds terrifying, and I’m glad she kept her head under these condition. I asked Paul R. Krausman, a Certified Wildlife Biologist at the University of Montana, who studies coyote behavior and human and coyote interactions, for his thoughts on this situation. Here’s what he said:

“What Jessie describes is an interesting situation, and one that could have been troublesome. It is unlikely they were protecting the water. Predators will use water when available, but are adept at obtaining moisture from their prey.

“The large pack could have been a female and her pups with one or two others and their intent was likely to attack the prey (the dogs). The owner’s attempt to discourage the coyotes by tossing rocks may have been more of a deterrent than she knew. Coyotes do hunt in packs and do hunt as described. It is very effective as the prey can’t watch all of them at once and if one can blindside the prey, they have been successful.”

Robert Timm, retired director of University of California Hopland Research & Extension Center and a UC Cooperative Extension wildlife specialist, told me, “There are increasing numbers of reports of coyotes confronting or attacking people and pets (including at times dogs on leashes) from many areas throughout North America.  The experience of your reader is not atypical of what’s reported, particularly in areas where coyotes are now sufficiently habituated to humans to be living essentially full-time in suburbia or in natural areas frequented by tourists (e.g., state and national parks, campgrounds, hiking trails,) where coyotes likely come into contact with humans who have food… and probably intentionally feed coyotes in many instances, thereby increasing and speeding up the habituation process.  The reader didn’t mention the size or breed of the dogs involved; for medium to large dogs, such confrontations may be territorial defense, but for small to medium dogs I suspect the coyotes often regard the dogs (as at times they do toddlers and small children) as potential prey.” 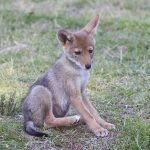 David L. Bergman, Arizona State Director, USDA APHIS Wildlife Services, gave what seems like a reasonable explanation of what happened. “Based on the information provided I would consider that the coyotes were being territorial and protecting a den.  The owner’s dogs i.e., other canines, would be considered a threat to any new born pups in the den and thus a target for the territorial pack animals.  In Arizona, coyotes usually breed in February or March and have’a gestation period of 63 days. Birth of the pups could be during April or May right around when the individual had the encounter.  As to the pack size, it is likely that the pack was made up of the dominant male and female and last year’s pups that had not dispersed.  Pups disperse anywhere from 4 to 10 months of age with some dispersing after 1 year of age. As to the behavior of the attack, size will not matter when they are protecting pups.  From what is described, the coyotes showed their hand in that they were willing to protect their den site and they worked together to herd the intruders out of the area.”

The Experts’ Warning: All of the experts I consulted expressed the same concern that coyotes habituated to people can be dangerous, especially to pets and children. A paper co-authored by Robert Timm outlined a “sequence of increasingly bold coyote behaviors” by coyotes:

I tend toward tolerance and acceptance of wildlife, rather than aggression, but the experts agree that with coyotes this is a mistake. Human-coyote interactions have become more common across North America and attacks on pets and even people have grown sharply since the early 1970s. I believe our modern tendency to be friendly to wildlife is generally a good thing, but when applied to coyotes, it may be asking for trouble, putting people and pets at risk and leading ultimately to lethal control of coyotes when they cause problems. It’s not easy to re-instill a fear of humans in coyotes that have become habituated, so it’s better to keep them nervous from the start.

Coyotes start out wary of people, and the experts generally recommend yelling at them, throwing rocks at them, and otherwise harassing them to keep them wary. Don’t leave pet food outside, and take special care with children and small pets in areas where coyotes have been seen. Never feed coyotes.

Standing up to Aggressive Coyotes: The University of California has an excellent summary of information about human and coyote interactions. In it they suggest a strategy for standing up to a coyote. “If you or your pets are approached by an aggressive or fearless coyote, try to frighten it away by shouting in a deep voice, waving your arms, throwing objects at the animal, and looking it directly in the eyes. Stand up if you are seated. If you are wearing a coat or vest, spread it open like a cape so that you appear larger. Retreat from the situation by walking slowly backward so that you do not turn your back on the coyote.”

Given these suggestions, it sounds like Jessie did the right thing.

Is eating dead birds normal for a squirrel or chipmunk?

What is this spider on the ceiling?

What is causing this vinegar smell?