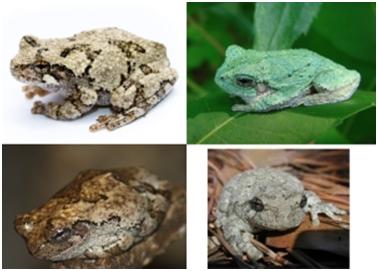 apart by appearance, especially since both are so highly variable. In fact, despite the “gray” in its name, the gray tree frog can be any color from green to brown or gray, as this collage shows. And the Cope’s has the same variation. To make it even more difficult, any one individual frog can change color to some extent depending on its surroundings. What both species have in common is yellow markings on the underside of their hind legs, so look for that. 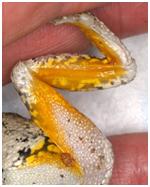 The way experts tell the two species apart is by their call. Carl Gerhardt, at the University of Missouri, who studies communication in frogs, says that above 75 degrees, the difference between the two species is that you can hear distinct pulses in the call of a gray tree frog, whereas the Cope’s sounds more like a buzz. (As the temperature drops, however, the trill of the Cope’s slows down and begins to sound more like the gray.) Listen to Dr. Gerhardt’s recordings of the two species:

Now listen to Diane’s recording again and try to guess which frog Diane’s is. Click here to see if your answer agrees with Dr. Gerhardt.

Another way to tell which frog you have is by location. As the range maps at these links show, if you’re looking at one of these frogs in the most southeastern states of the United States (Florida, Georgia, Mississippi, Alabama, South Carolina), you probably have a Cope’s tree frog. If you are in the northeast, from New York to New England, you almost certainly have a gray tree frog. In all the other states, it’s possible to find both. Where Diane lives in Stark County, Ohio, only the gray tree frog has been recorded, so that’s confirmation that Dr. Gerhardt’s identification from the frog’s song is correct.

Elizabeth, by the way, said she took her picture in southern Indiana, which means she probably has a Cope’s tree frog.

Sometimes, this process goes awry and an egg or sperm cell will end up with two sets of chromosomes or even three or four, instead of one. When it joins with its partner, the resulting embryo will have more than the usual number of chromosomes. Usually when this happens, the embryo doesn’t develop, or it dies after developing.

What’s interesting is that the three populations of gray tree frogs sound very much the same when they sing – and sound similarly different from Cope’s tree frogs. This suggests that the doubled chromosomes themselves lead to the different song. In fact, Dr. Gerhardt and one of his students have been able to artificially create frogs with three sets of chromosomes (midway between the two of a Cope’s and the four of a gray tree frog). These frogs sing a song whose trill rate is between the Cope’s and the gray.

How this happens is not well understood. But having extra genetic material does have effects. For one thing, it makes the cells of the gray tree frog larger than those of the Cope’s tree frog. It seems likely that the larger cells cause the slower trill rate in the artificially created frogs and in the gray tree frog.

Which is good for us, because otherwise, the only way to tell the two species apart would be to put their cells under a microscope and count chromosomes.

Thanks to Dr. Gerhardt for the identification of Diane’s recording.

Dr Gerhardt believes this to be a Gray tree frog (Hyla versicolor). Click to return.

What’s this bug with a flat abdomen?