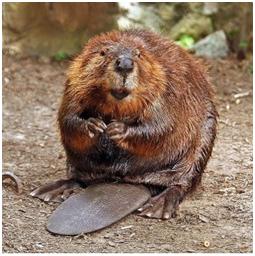 The Short Answer: I spend most of the summer on a small lake in central Massachusetts. At least once every summer, I am startled by the sound of a large animal splashing into the water at the lake’s edge at night. My first thought is always, “Wow, that sounded big! Like a person.” And every time, it turns out to be a beaver. The North American beaver (Castor Canadensis) and the very similar European species (Castor fiber) are among the world’s largest rodents, and can reach 60 pounds (27 kg), but they aren’t really as big as a person, and the typical weight is more like 40 pounds (18 kg). Maybe it’s that big paddle tail they carry around, but somehow, they make a lot of noise getting into and out of the water.

They are also mostly nocturnal. And New Jersey, like most of the country, has a growing population of beavers. So I’m putting my money on a beaver. This is the time of year when two-year-old beaver disperse from their family’s home and set out to find their own waterfront spot. So it may have been traveling up or down the Delaware, looking for a place to settle, and stopped to take a dunk in your garden pond. If you have any kind of water plants, it may have been getting a snack as well. Water lilies are a major diet item for them.

The one thing that doesn’t fit is your description of the animal as “dark with some white.” Beaver are pretty much brown, although there can be lighter and darker areas. It’s possible that what you saw as white was really light reflecting off the beaver’s wet and glistening fur.

More Info: Beaver originally ranged all over North America, from the Arctic Circle to Mexico. There may have been 600 million beaver on the continent before the arrival of European settlers. Despite that enormous population, by the late 1800s, beaver had been trapped and hunted to the point of local extinction in many parts of the country. With conservation efforts and a change in clothing styles that reduced demand for their pelts, beaver populations rebounded. Today, beaver once again cover all of North America – including New Jersey. However, estimates are that the population is about 6-10 million, a far cry from their original density. Even at these lower numbers, the dam building activities of these notoriously busy animals conflict with that other busy builder in North America: people. All across the continent, communities struggle to thwart beaver when they build dams that create flooding in yards and roads. And as anyone who has tried will attest, they are not easy to thwart.

Trivia: My last name, Pelletier, is French for “furrier,” someone who traps, skins, or trades animals like beaver, and is related to the English word “pelt.” Pelletier is a very common name in the French-speaking parts of Canada, so it may have been my ancestors who helped drive beaver almost to extinction. These days, I prefer to watch them, and occasionally be startled by their enthusiastic splashing.

Sources: There is a very nice summary of beaver information in a USDA Forest Service report at: http://www.fs.fed.us/r2/projects/scp/assessments/northamericanbeaver.pdf.

Crushed ice jelly on the ground

Why are mallard drakes so aggressive?

What kind of frog is this and what are the red bumps?

Is it Safe to Swim with Freshwater Jellyfish?