Who is Eating the Goslings?

The Short Answer: This is a murder mystery with a lot of suspects! Almost all of the creatures you mention are capable of taking goslings. Normally, an island would provide some protection from some of the more terrestrial predators, but this is a pretty small pond. I wouldn’t be surprised if a fox or a coyote would swim to the island if it knew there were a handful of gosling snacks waiting. Raccoons would also be high on the list of suspects, and 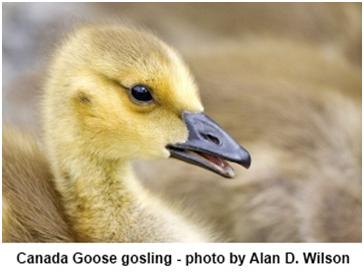 they certainly aren’t afraid of water. Hawks and even crows will take goslings from above, so the island is no protection from them. Neither would it be protection from a stalking heron. Snakes are also likely gosling predators, but as you say, they would be less likely to get a bunch of goslings in one day.

Of course, Canada goose parents will vigorously defend their goslings, so it would be difficult for any of these predators to get them all before the adults counterattacked or moved the goslings to safety.

One thing you didn’t mention is disease. Goslings are susceptible to disease, and that can often wipe out an entire clutch of goslings, in very little time. One deadly possibility is Leucocytozoon simondi, a protozoan blood parasite similar to malaria, which is carried by black flies. One documented outbreak of Leucocytozoonosis in Michigan killed 84% of goslings. That’s about the right level of mortality to match your 7 out of 8 missing goslings.

More information: I asked Tom Fondell, a Wildlife Biologist for the U.S. Geological Survey at the Alaska Science Center, for his opinion. Tom has done research on gosling mortality of the Canada Goose (Branta canadensis) at the Copper River Delta in Alaska. The list of predators there is different from that of central Missouri, but not as different as you might think. Here’s what Tom said:

“For most waterfowl the first few days are the most dangerous. In our study, on the Copper River Delta, the main predators of the goslings were mink 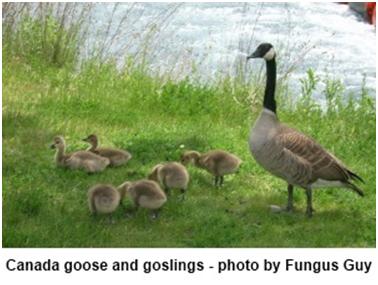 and eagles.   Maybe mink could also be a problem in Missouri.  Muskrats would not be a problem.  Raccoons might take a gosling or two. But I would be surprised if the adults did not put up a defense against a small mammalian predator, and that the goslings would disappear all at once.

“In some ways predation by bass makes sense. The adults would not be able to defend against them, and might not even observe the predation event occur.  I worked on a canvasback project in Nevada (Ruby Lake National Wildlife Refuge) where the number one predator of ducks was suspected to be bass and these were just fish in the 1- 1.5 lb range.  (A study of bass there did find baby coots in the stomachs of a number of bass.)  If this guy has large bass (several lbs and larger) I do not see any reason they wouldn’t take goslings, especially during the first few days after hatch.  And if there are a number of bass in the pond I do not see why they wouldn’t take many goslings.”

Given Tom’s findings, mink strike me as a very good possibility. According to the Missouri Department of Conservation, mink are present throughout Missouri. But because they are small and mostly nocturnal, you might never see them. When I asked Tom about disease, he thought that was a possibility, but that you might have noticed sick goslings. I guess that depends on how closely you watch them. Tom’s suggestion is that you should make a gosling lure and see if you can get bass to strike at it. That might give you a clue as to whether bass are the culprits.

Another underwater suspect is snapping turtles, which will pluck baby waterfowl from underneath in shallow water. Unless there’s quite a few of them in the pond, it doesn’t seem likely they’d get them all so fast, however.

Of course, one simple explanation is “all of the above.” It’s possible that it isn’t really one predator taking seven goslings at one time, it just happened to seem that way. With so many dangers in such a concentrated area, it doesn’t seem out of the question to me that you could easily lose one gosling to seven different predators in a single day. Tom Fondell also pointed out that if there isn’t much forage for the goslings on the little island, the parents may be leading them far afield, exposing them to predation from everything from the bass to hawks.

One Suspect We Can Rule Out: Goose parents don’t seem to count that well … or maybe they do. On larger bodies of water, where there might be more than one pair of geese breeding, the goslings often get mixed, and the parents don’t always seem to sort them out. One day, you might have two pairs, each of which has five goslings (about the average). And then the next day, you see one pair has only one gosling. You might think they had a disaster, but then you realize the other pair all of a sudden has nine goslings. Is that because goose parents can’t count? Or maybe they’re perfectly happy to have someone else do the work of leading their goslings around.

In this case, however, with only one pair on this small pond, we can probably rule out gosling mix-ups.