Where can I find tadpoles? 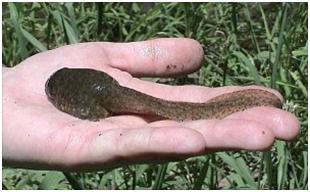 The Short Answer: I tried to get a more definitive answer as to a specific pond for you, without success, but you might have more luck if you ask in person at a local nature center. What I can say, however, is to look for someplace with standing water, and with few fish. No fish is even better. Amphibians such as frogs, toads and salamanders all lay eggs that turn into tadpoles. And all fish love to eat tadpoles and some eat the eggs as well. So amphibians that lay their eggs in vernal pools (pools that dry up in the summer), and other fishless waters do best. Also, there tend to be fewer tadpoles in running water such as streams and rivers. Quiet ponds in wooded areas are often your best bet as they’ll have frog, toad, and salamander tadpoles. The larger tadpoles of bullfrogs and green frogs might be the easiest to see and catch and you’ll often see them at the shoreline. As to when, you should be able to find tadpoles throughout the summer where you are, especially bullfrog tadpoles.

Once you catch them, you have to figure out how to keep them. The website below seems to have good information. One of the warnings is that chlorine will kill tadpoles pretty quickly, and virtually all municipal tap water has some chlorine. This site recommends letting your water sit in the sun for several days. Another possibility is the chlorine removal treatments sold in pet stores for keeping fish.

More Information: Each state has different regulations about collecting frogs, toads, and other amphibians. According to Brad Johnson, the Minnesota Department of Natural Resources Conservation Officer in your area, “You’re allowed to possess 12 dozen (144) frogs, including tadpoles, for personal use as bait, but adults (16 and older) must have a fishing license. Kids under age 16 don’t need a license. Of course, if you don’t use the tadpoles as bait, but instead keep them to raise them and let them go, that’s fine.” So unless you want to start a frog farm, you’re probably okay.

Good luck! Let me know if you catch anything.

For more information on Minnesota wildlife, you can go to www.dnr.state.mn.us.

Are There Ducks in Antarctica?

What are these green jelly blobs?