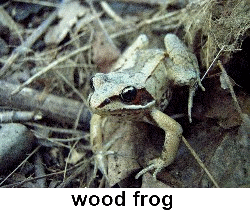 The Short Answer: Frogs and toads only call when they are breeding. The calls are basically advertisements to females to come closer and to males to stay away. Of course, a calling frog also says to every predator in the area, “Here I am. Come and eat me.” So basically, frogs use their calls to get mates and then they shut up. The breeding season of each species is different, however. Wood frogs (Rana sylvatica), for example, start calling when there is still ice on the ponds and call like crazy for a few weeks and then don’t make another sound the rest of the year. Bullfrogs (Rana catesbeiana), on the other hand, don’t start calling until mid-late spring and then continue well into summer. Even during their mating season, frogs and other amphibians can be very sensitive to environmental factors in terms of when they call. It’s impossible to know what flipped the switch on your frogs without knowing which species you were hearing and what the weather conditions were, but if I had to take a wild stab, I would guess that you had a few hot and/or windy days and the frogs stopped to wait for better conditions. 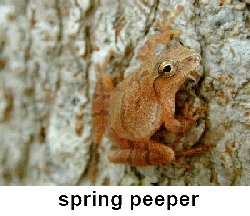 More Information: Researchers have studied when frogs call and what fires them up. They want to know this out of basic scientific curiosity, and also because wildlife managers use frog calling as a way to gauge population levels. With so many amphibians in decline in the U.S. and around the world, finding ways to track population levels is a key conservation tool. 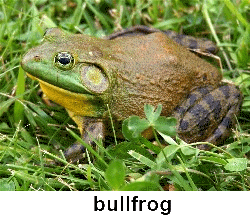 There are many factors that seem to affect frog calling levels, and each species is affected differently, but a few key ones are air and water temperature, wind speed, relative humidity, and barometric pressure. Temperature is key because both the frogs and their eggs and tadpoles are adapted to different temperature levels and frogs that mate and lay eggs at a time when the water is too hot or too cold for their offspring to develop well will not leave many descendants. For example, one study in New Brunswick, Canada found that spring peepers (Pseudacris crucifer) called when the water temperature was as low as 39 oF (4 oC), but they stopped calling when the water temperature went above 71 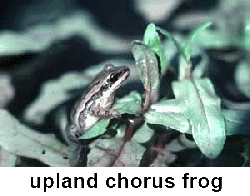 Wind speed and relative humidity may play a role because frogs are susceptible to drying, and since calling for most frogs requires being out of the water, exposure to drying wind is a problem.  Wind noise may also drown out the calls.  Since calling takes a lot of energy, there’s no sense in wasting all that energy if no one can hear.

The remarkable thing is that because all of the frogs of any one species in one area are similarly adapted to conditions of that locality, they can all switch on or switch off with amazing synchronicity. One night, the chorus frogs (Pseudacris feriarum) are calling like crazy, and the next night there is silence. High temperature in particular seems to have this effect. And the effect of high temperature is fairly universal across many species of amphibians, which is why I suspect that if you had several species calling and then silence, it was probably a rise in temperature that switched them all off at once.

Did the Goslings Grow Up That Fast?

Who is Making This Chirp and Splash?