This is part two in a three-part series about photos of bright green eggs first submitted to AskaNaturalist.com in the summer of 2014. The photos came from a reader in Nova Scotia and another in Maine. To read part 1, click here. To read part 3, click here.

Previously on “string of bright green eggs”: Two independently submitted strings of bright green eggs or something like eggs, from Nova Scotia and Maine, July-Aug 2014. First thought was amphibians symbiotic with algae. Amphib expert says emphatically, “No!” He suggests algae. Algae expert says “No. Maybe snail eggs?” Rob Dillon, snail expert, says he received a similar photo several years ago, and the person who sent it hatched the eggs and got tiny baby Lymnaea (Bulimnea) megasoma, a freshwater snail of the northern United States and southern Canada.

So the answer to who laid these eggs: snails … but wait ….

Snails with legs?: Shortly after I sent the bright green string photos to professor Dillon, I was doing an image search for various combinations of green, string, eggs, etc. I came across this page: http://www.fishpondinfo.com/egg.htm, where Robyn Rhudy, who describes herself as “Specializing in Nature, Animals, Fish, and Ponds,” has some good information on how to identify various egg masses to be found in freshwater. When I emailed Robyn and asked if she knew what the egg masses from Nova Scotia and Maine were, she said she didn’t, but that she had seen something like this before. She directed me to the bottom of her page about the aquatic insects you can find in a backyard pond, where she describes how a reader sent her a photo and this message:

“I found some eggs in a neighbor’s pond today (July 25) here in central Vermont. The clear 3/8″ diameter strand is configured in a ring about the size of a hair elastic, with hundreds of tiny (salt grain size) green dots in a very orderly spiral pattern along the strand. The ring was attached to a submerged rock and is very elastic….”

“The diameter of the elastic band (which does not break up when handled and will stretch to fit over my hand) is about 1/4″ – 3/8″ when un-stretched. It is about the size of a hair elastic but thicker. It is hard to tell how big the actual egg white part is because they are arranged in a ring and not separate. And the coil of green dots is very uniform and regular. As you can see, I’ve scraped the strand off the rock and have it in a jar to see what hatches….”

This description matches the two bright green strings I previously described in Part 1, including the key fact of coming from the northeastern US/Southeastern Canada region. The only difference is that in the photo submitted to FishPondInfo, the string is less green and more brownish. And the key thing is that when Robyn’s reader hatched the eggs, she drew a picture of what hatched. The creature she drew has six legs and a long abdomen. Definitely not a snail. The only creatures on this earth with six legs are insects, and the drawing looks like many aquatic insect larvae.

With this new information, I renewed my search, but in an insect direction. I soon latched onto the chironomids as a possible source for the gelatinous, spirally organized egg mass . The family Chironomidae includes at least 20,000 species of small flies found worldwide. Chironomids are in the suborder Nematocera, which also includes our all-too-familiar mosquitoes and blackflies as well as midges. Unlike many other midges, however, chironomids don’t bite. In fact, they are often descriptively called “non-biting midges” and many chironomids probably don’t feed at all as adults. That doesn’t mean they don’t annoy people, however. Chrironomids are famous for hatching simultaneously in plague-like numbers from some bodies of water, to the extent that they cover surfaces and ruin summer lakefront parties, and when they die simultaneously, they can form smelly piles of tiny rotting corpses.

Before we wish these tiny creatures off our lovely planet, however, we should acknowledge that the enormous numbers of chironomid larvae, feeding on detritus and microscopic organisms, form a key link in the food chains of nearly every body of freshwater on the globe. They can survive in clean water and they help to clean dirty water. Many species that live in low oxygen conditions in mud have a kind of hemoglobin in their body fluid that helps them pull oxygen from the water. Because hemoglobin makes their transparent bodies look pink or red, these larvae are often called “bloodworms” when they are sold as food for aquarium fish.

In fact, as I looked for confirmation that these egg masses were laid by chironomids of some kind, I came across this photo on the website of someone who raises goldfish as a hobby: http://goldfishgarage.blogspot.com/2014/05/chironomid-bloodworm-egg-mass.html.

On that site, there is a photo of egg mass that looks very similar, in that it has spirally arranged eggs in a gelatinous string. It’s not exactly the same, but it seemed close enough to offer support for the chironomid idea. And when I asked David, who runs GoldfishGarage.com, he confirmed that he raises chironomids in his garage, as “bloodworm” food for his goldfish.

On his site, David also has a great video that shows the egg mass developing and tiny “bloodworm” chironomid larvae hatching. https://www.youtube.com/watch?v=VtNB6wYzas4#t=115.

Score one for chironomids as the layers of the Nova Scotia and Maine egg masses.

For confirmation, I sent the photos of the Nova Scotia and Maine egg masses to a handful of chironomid experts and asked for their opinions. The answers ranged from “probably” to “definitely!” with the consensus leaning toward the genus Chironomus. And an image search for “Chironomus egg mass” shows several photos of egg masses that look like David’s Goldfish Garage photo and very similar to the egg masses from Nova Scotia and Maine and from Robyn’s Pond Page. 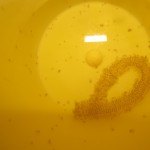 Ali Arshad, one of the chironomid experts I contacted, suggested that I write back to the AskaNaturalist readers who submitted the egg mass photos and ask them to put them in a bucket and see what hatches. I didn’t hear back from Emily in Nova Scotia, but Nancy from Maine was cheerfully willing to create a nursery for hundreds of mystery insects. She said the original egg mass had been put back in the lake, but she collected another one from her dock. And when it began to hatch a few days later, Nancy sent me this photo:

And that’s when the chironomid train went off the rails.

If you zoom in on one of the dozens of hatchlings coming from Nancy’s egg mass, you’ll see this:

The resolution is not great, but what is clear is that this tiny creature has six legs! But if you watch David’s video of chironomids hatching and look very closely, you’ll see that the larvae that hatch from his eggs – like all chironomid larvae – don’t have legs. They are long and skinny and have stumpy fake legs called parapods.

When I zoomed in and saw six legs on Nancy’s hatchlings, I knew these were definitely not chironomid larvae. And then I realized I should have paid more attention to the drawing that had been submitted to Robyn’s Pond Page, because it too has six legs. In fact, that’s what led me to think the egg masses belonged to insects in the first place. And the drawing is a reasonable representation of Nancy’s tiny hatchling.

I presented the six-legged evidence to chironomid experts who had expressed confidence that the eggs were chironomid, but while they agreed that the six-legged hatchlings were not chironomid larvae, they suggested that maybe the six-leggers were “hitchhikers” that didn’t really belong to the egg mass.

I wasn’t comfortable with that explanation because there were so many “hitchhikers” on Nancy’s egg mass, and for a while, I toyed with the idea that the six-legged hitchhikers were actually feeding on the egg mass. In fact, it occurred to me that maybe that could explain both the six-legged larvae coming from a chironomid egg mass and also explain how someone got baby snails from a similar egg mass (Remember the snails? If not, see Part 1). Maybe the snails were also feeding on the egg mass. None of the chironomid experts I contacted seemed to think much of that idea, however, so I dropped it and reluctantly accepted that these had to be chironomid egg masses.

I put aside the distracting detail of six-legged hatchlings, and prepared to make my determination: Chironomids it is …

But Wait, There is Another Possibility: In the third and final installment of this story, we find out that there is yet another possibility for who laid these egg masses, and it explains the six-legged larvae.

Sources: Sources and thank yous are at the end of Part III, coming soon …

What are these bubbles all over the lake?

Stung while in river