The Short Answer: I would leave these goslings alone. Unless you have some other evidence to suggest that something has happened to the parents, I would assume they’re off doing something else and will return to the goslings. Please update us.

Our instincts are to help wildlife that seems to be in danger, and baby birds universally trigger people’s protective emotions. But wildlife experts say that in 99% of cases, you’re better off leaving baby birds alone and letting their parents care for them. 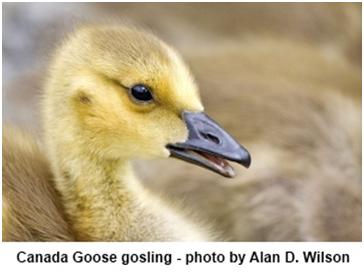 More Information: A few days ago, I received another report of missing goose parents:

How can I rescue an injured Canada goose gosling? The parents are missing and when I contacted wildlife rescue they told me they didn’t have the resources to pick it up. They also told me if I could bring it in they would absorb the vet fees and look after it but I have no idea of how to go about the rescue.

I didn’t have any great ideas about how to catch the gosling, but when I checked with the reader a day or two later to see if she had caught it, she said:

No, unfortunately I can’t get near him now that a Mallard female with ducklings has adopted him.  The gosling takes his cue from the female and she is hyper alert.  He is still limping and his foot is backward, but he seems to be swimming ok and looks healthy enough otherwise, and he’s eating.  He is about three weeks old now.   He will no doubt be somewhat safer with the duck family.   Still, I doubt if he will survive.  I’m guessing Coyotes got the parents, as there have been sightings in my area of the city lately.  The first time I saw and photographed the geese and gosling they came right to me.  Because as soon as I saw the gosling I didn’t move at all.  Made myself as un-threatening as possible.  But the next day the whole population of wildlife on the pond was on full alert.  I couldn’t get within ten feet of the pond before every duck and goose was on the water.  It is the same now every time I go to this pond.  I’ll keep checking on the gosling though and if I get the chance I’ll grab him.  Maybe I can tempt him into coming closer with some oats.  He’ll need surgery to fix that foot but if it’s left too long I don’t know what can be done.

Let’s hope the gosling does okay in this real life version of the ugly duckling story. It’s amazing how some animals adapt to disabilities.

Is This a Pattern: About a month ago, I received several “Who Is Eating All The Goslings?” questions.  Now, I seem to be getting “Where have the goose parents gone?” This seems to be matching the timing of the breeding season, and I wonder if next year the pattern will repeat itself.

Mini blue jellyfish all over the beach?

What are these tiny eggplants?