Why do fall webworms prefer trees with compound leaves? 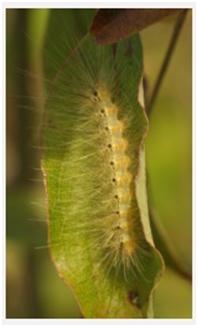 The Short Answer: I can’t find any published information that the fall webworm (Hyphantria cunea) prefers trees with compound leaves, and in fact, fall webworms are known to be polyphagous, which means they will eat many different foods. The fall webworm is considered to be exceptionally polyphagous, having been documented feeding on more than 200 species of trees and other plants – many with compound leaves and many without.

Compound leaves, by the way, are leaves where the petiole, the leaf stem, contains two or more leaves. See the picture of black locust leaves at the right. In trees with “simple” leaves, each leaf has its 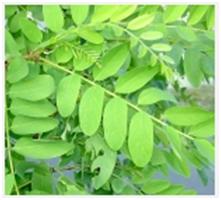 own petiole and is attached directly to a branch.

More Information: The choice between trees with compound leaves or simple leaves wouldn’t be made by the webworm caterpillar, it would be made by the adult female moth that is laying eggs. Once they hatch, fall webworms immediately create a silk tent and start eating right where they were, trusting that Mom laid them in the right place. It’s possible that in your area, most of the trees on their instinctive list of potential laying sites are compound-leafed, or that you’ve got a local population that is expressing a preference for those specific species. You’ll have to keep your eyes out and see if your hypothesis holds up.

Also, the fact that fall webworms will use so many different kinds of trees, including trees with simple leaves, doesn’t necessarily mean they don’t have a preference for trees with compound leaves. It’s possible that it’s easier to build a good silk nest in a tree with compound leaves, but I don’t believe anyone has done that research. There was one study published in 1978, where fall webworm caterpillars were raised partway on black cherry (Prunus serotina), which has simple leaves, and then given a choice between pin cherry (Prunus pennsylvanica) – which has simple leaves, white ash (Fraxinus Americana) – compound leaves, American elm (Ulmus americanum) – simple leaves, or shagbark hickory (Carya ovata) – compound leaves. This experiment was not about compound versus simple leaves, but the basic results were that the caterpillars preferred black cherry over elm (simple) and ash (compound), but not over pin cherry (simple) or shagbark hickory (compound). So their preferences were completely mixed up as far as compound versus simple leaves. Because the caterpillars were raised first on cherry, this doesn’t really answer your question. And as I pointed out, in nature, the choice isn’t made by caterpillars, it’s made by the adult moths. 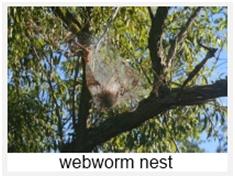 Invasive Species Information: Fall webworms damage trees by eating their leaves, but here in North America, where they are native, they rarely kill trees or cause major defoliation. They have been introduced around the world, however, probably as adult moths hiding in bark on wood products. The Global Invasive Species Database lists them as being present in more than 20 countries outside their natural range in North America. And as is often the case with introduced species, they can be a much greater problem in other places, which don’t have the full suite of natural predators that keep North American populations in check. Unchecked, fall webworms can completely defoliate a tree. Most trees can survive that for one year, but repeated attacks will cause branch dieback or the death of the tree because the tree can’t produce enough food during the growing season. The willingness of fall webworms to feed on so many different types of plants is often cited as one of the reasons these moths and their silk tent-making caterpillars are listed as invasive species of great concern in Europe and Asia. In the Chinese city of Beijing, officials estimate 50,000 trees have fallen victim to the webworm.

Is this a dragon paw?