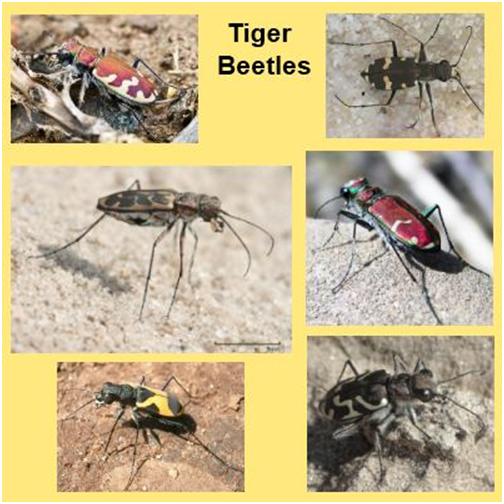 The Short Answer: This is a six spotted tiger beetle (Cicindela sexguttata), one of about 2,000 tiger beetle species. The six spotted tiger beetle is one of the most common tiger beetles in the United States, which does nothing to diminish its beauty. Like many tiger beetles, Cicindela sexguttata has an almost metallic iridescence — its color would be great on a sports car. Aside from their beauty, tiger beetles are known for their voracious predatory behavior and speed. Compared to their body size, tiger beetles run more than ten times as fast as people. In fact, Dr. Cole Gilbert, at Cornell University, has shown that when tiger beetles give chase, they often outrun their vision and have to stop to find their prey again. They run towards the prey, stop and reorient, run again for bit, stop and reorient again, and eventually capture their prey.

Because of their fancy colors and their charismatic behavior, tiger beetles are popular with insect collectors. While Cicindela sexguttata is common, some tiger beetles are endangered, in some cases because of collectors. If you find something you think is a tiger beetle, the U.S. Geological Survey has a great site that lists the beetles that have been recorded in each state, with pictures: http://www.npwrc.usgs.gov/resource/distr/insects/tigb/index.htm

This video clip shows a beautiful Japanese tiger beetle and then shows a tiger beetle larvae hunting. As you’ll see, they are just as ferocious as larvae. (Sorry for the crazy music.)

By the way, I want to commend Susie on her photos. They have nice detail and are well focused. They’re better than most of the photos of the six spotted tiger beetle on Wikimedia.com, so if she cared to upload them, she’d be doing a service to others looking for photos of Cicindela sexguttata. I also need to give Susie credit for the fact that a day or so after she sent me the question, she did some searching online, and was able to identify the six spotted tiger beetle herself. I thought it was worth making this post anyway because others might also see this same or one of the many other tiger beetles.

Cite this article as: Pelletier, TC. (November 16, 2010). What is this Fluorescent Green Beetle? Retrieved from https://askanaturalist.com/what-is-this-fluorescent-green-beetle/ on May 31, 2020.

14 thoughts on “What is this Fluorescent Green Beetle?”