The Sort of Short Answer: Full disclosure: Greg was visiting me, and we were sitting beside the lake and he asked me, “What is that popping noise?” and I had to admit that although I have often wondered about it, I didn’t know the answer. So I decided it was time to find out.

First off, here’s a recording of the sound. You might have to turn your speakers way up to hear the pops.  There’s one at about two seconds, one at 11 and one at 16.

At this end of the lake, there is an area of maybe a little less than a hectare (about 2 acres) that is covered with several species of floating plants commonly called lily pads, extending out probably 50 meters (165 feet) from shore. If you listen on a good day, you’ll hear the pops every few seconds coming from the area of lily pads. My first thought was that something was falling into the water and plopping, but the pops come from the full extent of the lily pads, so too far away from the shore to be something falling from the trees that line the lake.

When I first tried to see what I could find on the web, I came up with fishing sites that say something similar to this: 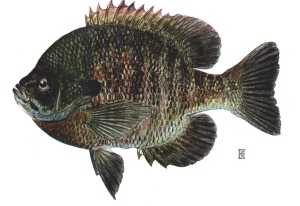 “Besides looking for baitfish in the thicker weeds, Hannon tries to find signs of bluegill eating worms or grubs off the bottom of the dollar or lily pads. Holes appear in the pads when this action occurs, and one can actually hear the popping sound of the sunfish feeding.” 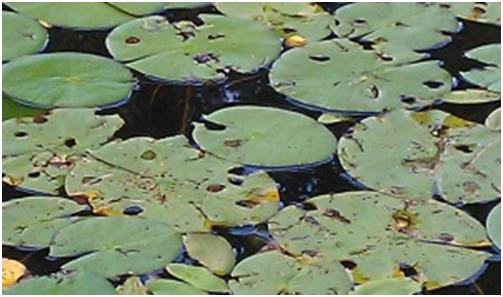 That explanation made some sense to me. There are certainly many sunfish in this lake, including bluegill (Lepomis macrochirus), pumpkinseeds (Lepomis gibbosus) and green sunfish (Lepomis cyanellus). And from my snorkeling, I know they often hang out in the lily pads. And in fact, as this picture shows, many of our lily pads have sunfish-mouth-sized holes in them. But to confirm this theory, I asked Dr. Tim Copeland, a fisheries scientist with the Idaho Department of Fish and Game. He also thinks sunfish are a good possibility, but isn’t willing to rule out other fish. “I used to fly fish for bluegills in lily pads and caught fish when such popping noises were present. But I also caught fish when I didn’t hear any popping noises (and vice versa of course). So in my opinion it could be any species of fish that live in weedy pond habitats. For instance, small bass might pick dragonfly nymphs from the pads. But sunfish are probably the most common.”

I also asked, Dr. Eric Dibble, who teaches aquatic science and studies sunfish behavior at the College of Forest Resources at Mississippi State University. He is more willing to bet on sunfish:

“The small sunfishes (family: Centrarchidae) i.e., bluegill (there are many other different species) are mostly insectivores and typically feed on young and adult insects. These fish have adapted to gleaning small organisms out of the water column as well as off of plants, the surface, and bottom substrate. Their mouth parts are structured is such a way to extend slightly when feeding so to create a vacuum. When they feed on the water surface, whether under a lily pad or directly off the top, a sucking sound or ‘pop’ can frequently be heard.

“I have a pond full of bluegill sunfish, and I frequently sit outside listening to the feeding in the early evening when they do much of their feeding. I also have bluegill, redear and longear sunfishes in an aquarium inside the house; and many times in the evening their feeding ‘pops’ awaken me.

I asked Dr. Dibble about the fish popping at night. Though I hear the sound most often during the day, I sometimes hear pops late into the evening as well. He said, “Generally, the centrarchids (sunfishes) have pretty good vision at night and will feed 24 hours, however much of their intensive feeding takes place during twilight hours of the day (dawn and dusk).”

So, on the basis of all those reports, I feel pretty confident to say that it is fish making the popping noises with suction feeding on lily pads. Probably sunfish, but possibly including others.

What About the Holes: The other question then, is, “Are the fish poppers making the holes in the lily pads?” I was unable to verify this in the scientific literature, but I do have a couple of clues. 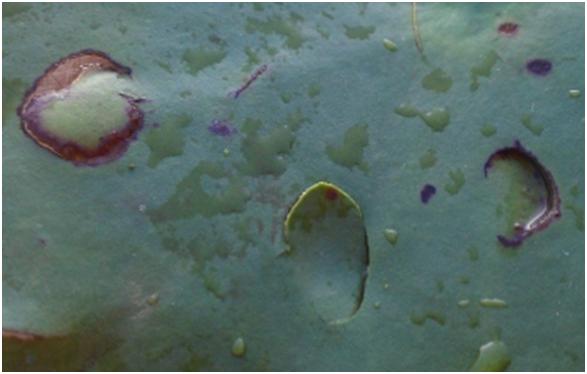 er part of the lake.

I got another tantalizing clue as I sat in a canoe, floating in the middle of lily pads, trying to record the pops, I heard one just to my right. When I looked in that direction, there was a lily pad jiggling wildly, as if something were in fact, pulling on it from underneath. When the movement stopped, I paddled over and discovered, as this photo shows, that the lily pad had what looked like a new hole. Notice that the edges of the center hole are freshly ragged and not browned, like the other holes.

This doesn’t qualify as proof, but I believe this hole was made in connection with the pop I heard.  I suspect it’s all connected. The popping noise comes from fish sucking tasty treats off the bottom of the lily pads, and the noise itself probably occurs when the leaf snaps, releasing the suction and creating a hole.  That’s why, after a long summer of feeding, the lily pads are pocked with holes.

And now, when guests ask me “What is that popping noise?” noise, I’ll have a better answer.

What made these swirls in the sand?

Why won’t our toad grow?

Should I be afraid of a goose?

An encounter With Beavers