Who Made These Tracks of Mud?

The Short Answer: I checked with several naturalists in the Saratoga Springs area, and although it’s impossible to be one hundred percent sure without catching the critter involved, the consensus is that these tracks were made by a mole, probably a star-nosed mole (Condylura cristata).  This tiny, strange looking creature is enormously interesting and the only mole that 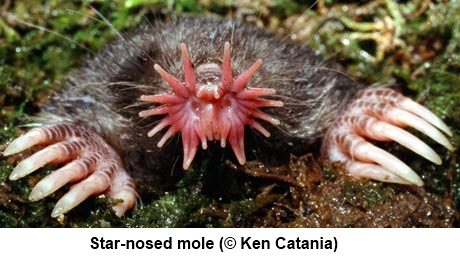 routinely lives in wet soil and tunnels through mud. It is found in wetter areas across a wide range of the eastern United States and Canada. As it tunnels, it uses its incredibly sensitive “star-nose” to feel for earthworms, insects, and other invertebrates. Star-nosed moles will also swim in shallow water, feeling along the bottom for tasty worms and insects.

During the winter, when the ground is covered with snow, star-nosed moles may tunnel so close to the surface that they push dirt up into the snow cover. When the snow melts, the mounds of dirt over the tunnels suddenly appear as tracks just like those in Jackie’s picture. It’s possible another mole species or some other burrowing mammal made the mudpile “snakes” Jackie observed, but the experts I consulted were all willing to bet on star-nosed mole. Here’s what they said:

“Based on the photos the general consensus here is moles. We think the ridges, especially the ones in the 2nd photo you provided are formed by sub-terrain mole movements. The soil may have been displaced up through the thatch and that is why it looks deposited on top … really it exuded up through … likely the moles were near the surface looking for earthworms in the damp soil.” Lance Durfey, Wildlife Manager for the New York State Department of Environmental Conservation. http://www.dec.ny.gov/about/631.html

“Looks like moles to me. Check out star-nosed mole – their habitat includes wet areas. Moles do not dig deep in winter as the snow covers and protects them – that’s why we only notice them in early spring. The rest of the year, they will dig further into the ground.” Lisa Hoyt, Director, Dyken Pond Environmental Education Center. http://dykenpond.org/

“It sounds to me like moles. Where it looks like they ‘deposited’ the mud is most likely the mole coming close to the surface and pushing the dirt upward to form a long ‘snake like’ shape – the moles sort of swim through the dirt making a series of holes where they surface and long tunnels where they are under the surface traveling through the mud. Wonderful animals in search of earthworms and grubs etc.” Patricia E. Wesner, Executive Director, Pember Museum of Natural History. http://www.pembermuseum.com/

“The description fits star-nosed mole. The ‘snakes’ look like the remnants of plugged burrows after snow melt. This phenomenon has been described many times for pocket gophers. The photo of the burrow opening does look like a mole construction. The shrew mole (Neurotrichus gibbsii) also may be found close to star-nosed mole burrows, and it might be difficult to differentiate between the two types of hole openings with a limited sampling.” Graham Hickman, Texas A&M University Corpus Christi [Professor Hickman studies subterranean mammals and did the first documented excavation of star-nosed mole burrows, published in 1982. One burrow complex was 270 meters (885 feet) long! Not bad for a creature that weighs about 50 grams (1.8 ounces)]. http://lsci.tamucc.edu/faculty/Hickman/

[Thanks also to Peter Olesheski, a naturalist at Up Yonder Farm Environmental Education Center.  http://www.upyondafarm.com/]

More Information: The most striking thing about the star-nosed mole is, of course, that crazy nose. Though there are other moles that have slight protuberances on their noses, there is nothing else like the star-nosed mole’s nose in the animal world. It is truly one-of-a-kind. The star consists of 11 pairs of appendages, 22 in total. Each appendage is covered with tiny organs of touch called Eimer’s organs. Other moles in the family Talpidae also have these organs, but the star-nosed mole has about 25,000 – far more than any other mole. With these incredibly sensitive touch feelers, a star-nose mole can identify food objects in complete darkness. It has little or no vision, and oddly enough, with such a fancy nose, it doesn’t seem to rely on smell much underground. If it misses a prey item with its star-nose by as little as a millimeter, it will keep right on going, digging through the darkness.

With such an amazing prey-finding tool, you have to wonder two things. First, why haven’t star-nosed moles taken over the mole world? And second, why didn’t other related moles evolve a similar structure for finding prey? One possible answer may be mud. Dr. Ken Catania, who won a MacArthur Genius Grant in 2006 for his work on the anatomy, neurophysiology, and evolution of the star-nosed mole’s star, speculates in one of his papers that the noses and Eimer’s organs of moles that tunnel through dry dirt need to be tougher to resist drying out and abrasion. It may be that the star-nosed mole was able to able to evolve such a remarkable sensory organ only because it lives in wet areas that are less harsh on a sensitive tentacled nose. And it may be that very organ that keeps the star-nose constrained to its muddy habitat, where it digs through the muck year-round, leaving mud snakes for people to wonder about.

By the way, Dr. Catania agrees with the likelihood that the mud tracks were made by a star-nosed mole.  This video shows him talking about his favorite research subjects: http://www.youtube.com/watch?v=jk96X-z7Vw0

For more information and more pictures of star-nosed moles, one good site is the Animal Diversity site hosted by the University of Michigan:  http://animaldiversity.ummz.umich.edu/site/accounts/pictures/Condylura_cristata.html

Osprey struggling to get off the water

Why won’t my dog watch TV?

What are these jelly blobs on my car?

What is this black, yellow, and white bird?