How Do Electric Eels Generate Electricity? 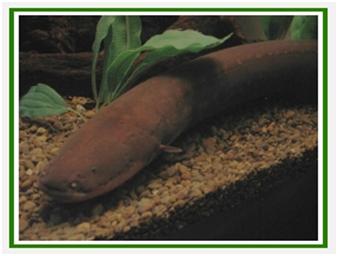 The Short Answer: The cells of all living things generate electrical charges. In an electric eel (Electrophorus electricus), thousands of modified muscle cells in the thick tail are lined up like batteries in a flashlight. Though each cell generates only about 0.15 volts, in a large electric eel, six thousand cells may be stacked to make one giant battery that can generate as much as 600 volts for a short pulse. A standard car battery generates 12 volts, so an electric eel has 50 times the shocking power of a car battery (though with less amperage).

Despite their name, electric eels aren’t actually eels (Anguilliformes). Native to South America, the eel-like fish are actually knifefish, in the Gymnotiformes order. Like many other members of this order, electric eels use electricity for sensing prey by creating weak electric fields and then sensing distortions in that field. It seems probable that the electric eel’s more powerful shocking ability evolved from organs originally related to electrical sensing. Compared to other fish, in the electric eel, organs like the heart and liver are located very close to its head. Even its intestine is shortened and looped, keeping it close to the front of the body. This allows the remainder of the electric eel’s body to be given over to swimming muscles and electrocytes, the “battery cells.” Electric eels can reach 6 feet (2 meters) in length and weigh nearly 45 pounds (20 kg). The shock from an electric eel can be very painful because the voltage is high, although it isn’t likely to seriously harm an animal as large as a person. The jolt from an electric eel can incapacitate the fish and crustaceans that are the electric eel’s prey, however. The eel, which generally lives in dark, murky water, then uses its electrical senses to find the stunned prey and swallow it before it recovers.

More About Batteries and Electric Eels: One key to understanding how electric eels can generate such high voltages is to know what it means to put batteries “in series” versus “in parallel.” A battery works by creating a difference in electrical charge. The positive (+) end of the battery is at a higher electrical potential than the negative (-) end. If the two ends are connected, through the wires of an electrical device like a light bulb, for example, particles will flow so as to equalize the charges. The stored energy that moves those electrons in the wire filament of the bulb is what we call voltage.

As an analogy, think of water flowing down a mountain stream. The height of the mountain is the voltage. Water will flow from the top of a mile-high mountain with much greater energy than it will from

the top of ten foot bump. If you step in the stream from the ten foot bump, you’ll feel a gentle massaging flow. Step in the stream with the same amount of water from the top of the mountain and you might get knocked over. And you can imagine that if you stack two mountains on top of each other, water will flow from the top with even greater energy. That’s the way it is with batteries. Stack two batteries in “series” so that the negative end of one battery connects with the positive end of the next, and the voltage adds up. Two 1.5 volt batteries stacked in series inside a flashlight combine to produce 3.0 volts worth of electrical energy.

But what does connecting batteries “in parallel” mean? Imagine if instead of connecting the batteries end to end, you line them up side by side and attach wires to connect

the positive end of one battery to the positive end of the other. Then connect the negative end of the two batteries. Now connect the combined batteries to the light bulb. While this doesn’t give you the same energy that stacking the batteries end to end gives, it gives you the ability to move more electrical particles.  Using the mountain stream analogy again, putting batteries in parallel is like standing two mountains side by side, each with a similar stream coming down. The water comes off the two side by side mountains with the same energy as from a single mountain, but now there’s twice as much of it.

Of course, it’s possible to do both. Stack two mountains on top of each other and then stand another two-mountain stack next to that one. And by connecting batteries end to end into stacks and then connecting several stacks together, it’s possible to increase both the driving energy (voltage), and the capacity to produce electricity.

Now, back to electric eels. The electrocytes of electric eels are arranged in stacks, each stack insulated from the next. Every stack of thousands of electrocytes acts as a separate “battery” that can generate voltages as high as 600 V. The separate stacks of cells then combine to give the electric eel the ability to generate a sizable pulse of electricity. Pure water is a poor conductor of electricity, but the waters where electric eels live have enough salt and other minerals to make them conductors. When an electric eel shocks the water, current flows out of the front part of its body, through the water, and back to the fish’s tail. Any other organisms in the vicinity will feel the stunning effect of this powerful current as it goes through them.

How electrocyte cells produce electricity: As I mentioned above, every cell generates tiny electrical charges. This is done primarily by

moving various positive ions (charged atoms or molecules) of metals such as sodium, potassium, and calcium out of the cell, which makes the outside of the cell positive compared to the inside of the cell. These ions might move back into the cell to equalize the charge difference, but cells use chemical energy to continually “pump” the ions out of the cell. This is all part of normal cell chemistry. This “resting voltage” is typically about 0.085 volts. In most cells, this charge isn’t much use as a battery, however, because it’s uniformly spread around the outside of the cell. The outside of the cell is positively charged and the inside is negatively charged. This arrangement makes impossible to stack them up to generate a high voltage. The electric eel’s electrocyte cells are different, however. They aren’t symmetrical. They have a relatively smooth side that is connected to nerve fibers, and a relatively convoluted side that is not. And all the electrocytes in a stack are oriented in the same direction, with the smooth side towards the tail and the convoluted side towards the

When the nerve fibers send a signal to an electrocyte, special pores on the smooth side of the cell open, allowing positive ions to rush into the cell. This temporarily creates an additional charge across the cell membrane on that side of the cell of about 0.065 volts. Now, instead of having a negative inside and a positive outside, the cell temporarily has a 0.085 volt difference across the convoluted side, and a similarly oriented charge of about 0.065 volts on the smooth side. These charges are essentially stacked in series, so that the end result is a brief charge across the entire cell of about 0.15 volts (0.085 +0.065).

But here’s the problem. This directed orientation of the charges doesn’t last long. In short order, the pores on the smooth side close, and the cell reverts back to its resting state. So if a normal nerve signal went out from the brain to each electrocyte, the signal would reach the first cells in the stack before it reached the cells at the end of the stack. By the time the cells at the end fired, the ones at the beginning would have already shut off again. Somehow, the electric eel has to synchronize the firing of thousands of electrocytes in a stack so they all turn on at the same time and add together to create the big voltage needed to shock the fish’s prey. Exactly how this works is not yet known, but it appears that at least three factors are involved:

All of these factors tend to slow nerve signals near the head and speed the ones near the tail. This equalizes the arrival of the signal, and allows all the electrocytes in a stack to fire at the same time.

Why Don’t Electric Eels Shock Themselves? A very common question asked by people who learn about the amazing powers of electric eels is “Why don’t electric eels shock themselves?” After all, they’re in the same water as their prey – and the current is being generated right inside them. Part of the answer to that question is that they probably do, in fact, shock themselves. Electric eels in the process of shocking have been observed to curl up and thrash a bit, just as if they were being shocked. But clearly, this shock, something they would experience repeatedly, doesn’t incapacitate them. One possibility is that the eels have evolved to be resistant to the pain and damage caused by shocking. They feel the shock, but it doesn’t bother them as much as it might bother other animals. It could also be that the eel is insulated from its own shocks. Of course, it can’t be completely insulated. If it is going to shock the water and its prey, it has to be electrically open to current going out and coming back. Remember, however, that all the eel’s vital organs are located very close to its head. It’s possible that the eel is electrically constructed so that it’s head and internal organs are mostly insulated and the current flows out from and back into the rest of the body. This combined with a tolerance to the effect of shocks might provide the answer.

Thanks for assistance to:

Dr. Leo G. Nico at the Southeast Ecological Science Center of the US Geological Survey in Gainesville, FL http://fl.biology.usgs.gov/All_Staff/nico.html

Dr. Bernd Kramer at the University of Regensburg, Germany. http://www.biologie.uni-regensburg.de/Zoologie/Kramer/index_en.html

Why is a Robin Hovering Around a Cardinal’s Nest?