Because the sequence of events in the search for an answer to this question took some interesting turns, I’m departing from my usual format to write this answer as more of a diary. If you don’t find this format interesting, don’t worry, I’ll soon return to my regular format.

The First String of Green: In July, I received an email and photo from Emily from Nova Scotia: 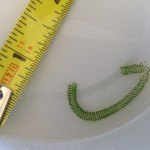 “We are finding these slimy strings of bright green eggs (?) in the lake. They can be found on the wharf poles, but the ones in the picture were on the cord for the underwater thermometer. Any idea what they are from?”

Emily cleverly included a tape measure in the photograph, which is in inches, so it looks like the uncoiled length of this would be about 2 inches, or 5 cm. The picture is of fairly high resolution (also clever on Emily’s part), and when I zoom it in, you can see that it consists of individual green dots held in a matrix of gel about 3 mm wide. I was able to make a rough measurement of the individual green dots at about 0.4 mm or 400 microns. And although it’s a little hard to count them because they are three dimensional, I came up with about 140 eggs in a 1 cm section of the string.

That seemed like a reasonable guess, given that the string in the photo looks superficially like the strings of colonial green algae in the genus Spirogyra, as shown in this photo. Spirogyra is much smaller, however, with strands more on the order of 0.1 mm or 100 microns wide. Still, it seemed worth a shot, so my next email was to John Wehr, a professor of aquatic ecology at Fordham University’s Louis Calder Center, and an expert in freshwater algae.

The Second String of Green: Before I heard back from Dr. Wehr, however, I received another email, this time from Nancy in western Maine. She sent me this photo, and said:

As you can see from Nancy’s photo, what she found was very similar to what Emily found in Nova Scotia. Going on Nancy’s suggestion that the looped mass was about the size of a U.S. quarter (about 2.5 cm or 1 inch), the string seems to be about 4 mm wide, and the individual dots seem to be about 0.5 mm or 500 microns – certainly in the same ballpark as in the string from Nova Scotia. Again, I counted dots in a 1 cm length, and got 125 – pretty close to the 140 of the Nova Scotia string.

Since these two egg masses were so similar, were found under such similar circumstances, and at the same time of year in freshwater from the same part of the world, from that point on, I began to include both masses in my emails to experts, under the assumption that these were two examples of eggs laid by the same creature, or at least similar creatures.

A day or two later, I heard from Dr. Wehr, the algae expert. He said:

“It is hard to tell from this magnification, but they look to me like an egg mass of some animal, which has symbiotic algae in association with them. I am algae person, not a zoologist, but while they may not be amphibian eggs, perhaps they could be snail eggs. Hard to say. But the green color is very likely the algae associated with the eggs,. This is phenomenon very common with salamander eggs and the association is apparently beneficial to both the alga and the eggs.”

The First Answer – Snails:  The snail possibility seemed reasonable to me, and I happen to know a freshwater snail expert, Dr. Rob Dillon at the College of Charleston. Dr. Dillon had been extremely helpful to me in a previous article on the egg masses of Physa snails. So I sent him the photos from Nova Scotia and Maine. Here’s what he said:

“Yes, the gelatinous strings of bright green bodies depicted do indeed appear to be the egg masses of a large pulmonate freshwater snail, Lymnaea (Bulimnea) megasoma (click here for photo, middle of the page). Very little is known about this critter. Its range seems to be restricted to WAY up north – Manitoba, Ontario, Quebec, Minnesota, Wisconsin, Northern Michigan, Maine. As far as I know, the egg mass of L. megasoma has never been described. The only way that I myself am able to identify your photos is that I received an inquiry nearly identical to yours from Quebec back in the late summer of 2011, and was clueless at the time, and my 2011 correspondent hatched the doggone thing out, and sent me a follow-up photo of the juvenile snails.

Dr. Dillon admitted he was unable to explain the green color of the embryos. He agreed that it looked like an algal association, but he pointed out that as far as he knew, that kind of egg/algae association had never been documented in a freshwater snail. Still, it seemed like maybe we had an answer to the question of who laid these beautiful egg masses.

Wait, There is Another Possibility: In the second installment of this story, we find out that there is another possibility for who laid these egg masses, and the experts who give me that possibility are just as certain about it as Dr. Dillon. The plot thickens … to read Part 2, click here.

Sources: Sources and thank yous are at the end of Part 3, coming soon …

Why are mallard drakes so aggressive?

What is this small jelly blob on a beach in Maine?