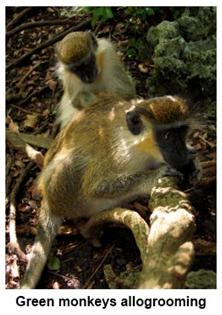 The Short Answer: You’re on track. Apes and monkeys (and lots of other animals as well) clean each other of dead skin, dirt, bits of leaves and other debris, and especially parasites like ticks, fleas, and lice. One study of Japanese macaques (Macaca fuscata, also called snow monkeys), found that overwhelmingly, what the monkeys were picking off each other were lice and lice eggs, which the cleaners then generally ate. Mmmm …

To see Japanese macaques grooming each other, click here.

More Information: When animals groom each other, it’s called “allogrooming” (autogrooming is cleaning your own fur…or washing your car). There are two theories about why animals engage in allogrooming, and as is often the case when two theories continue to compete for decades, both are probably true. The first idea is that it’s just about parasite removal and hygiene. Animals reciprocate in cleaning each other and removing blood suckers like ticks, fleas, and lice. The other theory is that allogrooming is primarily a social thing, a kind of snuggling with your buddy … or someone you want to be your buddy … with parasite removal as a side benefit.

Testing whether one of these two theories or the other is dominant in any one species isn’t easy, but sometimes it can be done. For example, one study with white-crowned mangabeys (Cercocebus torquatus) meticulously recorded what part of the body the monkeys allogroomed. The scientists reasoned that if allogrooming were primarily about social interaction, the monkeys wouldn’t necessarily favor the hard-to-groom parts of the body. What they found was that, in this species at least, they did favor parts of each other’s bodies that were hard for an individual to reach herself.

Other researchers have tried to predict how the behavior of primates who are allogrooming for social benefit would differ from those who allogroom simply for hygiene’s sake. For example, the purely hygiene theory would predict that the social status of allogroomers shouldn’t matter. Everyone has lice, so everyone should groom everyone else equally. But if allogrooming is primarily a social behavior, you’d predict the monkeys might try to win social favor, which means preferentially grooming those above you on the social hierarchy. You might even expect the monkeys to compete to see who gets to groom the higher-ups. And in some species, that’s exactly what the research has found.

It seems likely then, that the behavior is important in both ways, as hygiene and as social bonding, with the primary benefit varying from one species, and probably one situation, to the next.

Too Much Information: Just the other day, I went hiking with my wife and shortly after arriving home, I discovered I had a tick on my stomach. I was able to remove that one myself (no, I didn’t eat it … although I was tempted), but then my wife and I examined the parts of each other we couldn’t easily reach or see to make sure neither of us had any more ticks. There we were, a couple of great apes allogrooming … right there in my own house!

TANAKA, I., and H. TAKEFUSHI. “ELIMINATION OF EXTERNAL PARASITES (LICE) IS THE PRIMARY FUNCTION OF GROOMING IN FREE-RANGING JAPANESE MACAQUES.” Anthropological Science 101.2 (1993):187-193.

2 thoughts on “What Are They Picking At?”