Large eggs on the dock and in the water? 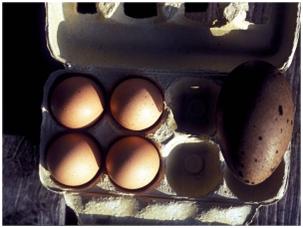 The Short Answer: From your description, your location and the presence of loons, one good possibility for the egg layer would be a common loon (Gavia immer). John Cooley, Jr., Senior Biologist at the Loon Preservation Committee in New Hampshire was kind enough to send me a picture that very clearly compares a loon egg to a chicken egg. As you can see, loon eggs are considerably larger and brown. Of the other waterfowl you mention, mallard eggs are generally cream colored or possibly grayish or greenish, and a little smaller than a chicken egg. You didn’t specify which of the three merganser species that breed in northern Wisconsin you have on your lake, but common merganser (Mergus merganser) eggs are just a little bit bigger than a chicken egg, and tend to be white or cream colored.  Red breasted merganser (Mergus serrator) eggs are also just a tad bigger than a chicken egg, and also on the lighter side. And hooded merganser (Lophodytes cucullatus) eggs are very round, slightly smaller than chicken eggs, and whitish.

So depending on what you meant by “brownish,” it’s a little hard to know which of these species laid your egg. There’s another clue, however. It’s that when you emailed AskaNaturalist.com on May 8, you said you had noticed the first egg two weeks earlier, meaning it would have been the third week of April or so. Given your description of the eggs as brownish, I was leaning towards common loon, but they don’t typically begin laying in northern Wisconsin until the first or second week of May. In central and northern Minnesota, for example, the earliest recorded date of laying is May 7.

Mergansers, on the other hand, lay earlier, which would better fit your timing. If you what you saw was a slight brownish tinge on an otherwise white egg that is a little bit larger than a chicken egg, then I’d say a common merganser or red breasted merganser laid these eggs. On the other hand, if it really was brown and twice as big as a chicken egg, I’d say a very early loon.

As for how they are ending up in the water … 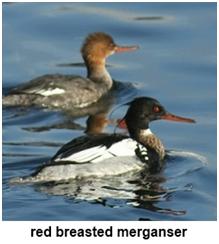 What you probably have is an inexperienced female of one of these species, who is laying eggs on the dock. The eggs are probably rolling off into the water. Loons generally only lay two eggs, a couple of days apart, so it’s possible that the bird laid one egg on the dock, which rolled into the water. I can’t imagine a loon picking up the egg and putting it back on the dock, so I wonder if what you saw on the dock was a new egg, and maybe the old egg in the water got moved by wave action or some other animal. Kate Taylor of the Biodiversity Research Institute points out that loons are pretty clumsy on land. They also take a long time to get in the air. They aren’t likely to just hop up onto a dock. So unless your dock is low to the water or easy to get to from land, that might rule out a loon. Mergansers lay half a dozen eggs or more, so if it were a merganser, you might have seen more eggs on the dock. Or maybe the female figured out that laying eggs on the dock was hopeless and went off to build a real nest. 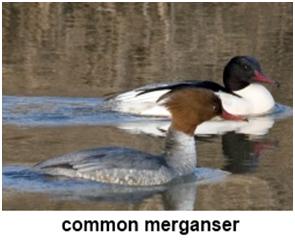 Thanks: Thanks to the loon experts (I’m resisting the urge to call them loony. I’m sure they’ve never heard that joke before): John Cooley at the Loon Preservation Committee, and Kate Taylor and Chris Desorbo at the Biodiversity Research Institute.

What are these purple shoots?

An encounter With Beavers