How to save these tadpoles? 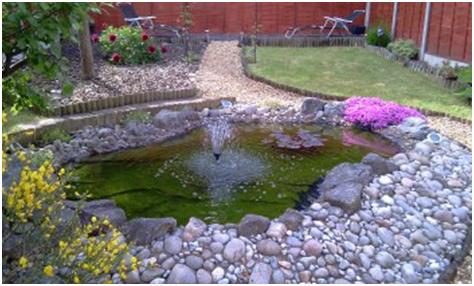 The Dialogue: (For something a little different from the usual format of my posts, I will share the emails that went back and forth on this question.)

Tom: Hi Joanna. Thanks for your question. This is in a garden pond, I assume? Any idea what kind of amphibian tadpoles they are?

Joanna: Hi tom. Yes, this is my garden pond. Here’s a picture. I have no idea what kind of tadpoles. I just don’t know what to do with them all. I am at the moment trying to clean my pond out and have managed to put about 15-20 of the tadpoles in a bucket. Will they be okay? What about the rest that are still in the pond? When the pond drains out will they die?

Tom: Until they turn into frogs or toads or salamanders or whatever they are, they will need water, I’m afraid. And water with food in it. For some species, that means algae, for others insects. Are you refilling the pond immediately? If so, I’d suggest keeping the tadpoles in a bucket and put them back once you refill the water. If not, then you might want to move them to a nearby lake or pond. Whatever nearby habitat seems most like your pond.

Joanna: I will be refilling the pond straight away. How have they survived this long without food? Will I have to go out and buy food for them? There are some leaves in the bucket from the pond. Is that okay? And some small insects floating on the top of the water. Is that a bad thing?

Tom: They are probably finding the food they need in your pond. If the pond has been there for any length of time, I’m sure you have algae and microorganisms and insects and things like that. The parents who laid the eggs in your pond probably have a way of judging it as a food supply. Leaves in the bucket is good. They undoubtedly contribute to the stuff the tadpoles were eating. For example, decaying leaves are food for microorganisms that the tadpoles might be eating.

You said you were cleaning the pond. Are you cleaning out all the leaves and gunk? If so, that might remove a good part of the food supply for the tadpoles, but I’d just put the tadpoles back and hopefully, they’ll do okay. Don’t forget, with animals like amphibians that lay hundreds of eggs, only a very small percentage ever survive anyway. So even if you left the tadpoles there, only a handful of your 70 were going to survive anyway. That’s just the way it works.

Joanna: Thank you again, Tom. I won’t empty the pond completely, just enough so the water can be cleaner to the eye. I will let you know how I get on at a later date. I will leave some of the leaves in the pond too, and I have a water lily in there for them so food should be on that too.

Tom: That’s very considerate of you towards the tadpoles. By the way, do you have chlorine in your water? Most municipal water systems do. If so, that might cause a problem with the tadpoles when you refill the pond. Here in the U.S., pet stores sell chlorine neutralizer products for tap water for ponds. I think you’re already doing more than most people would do to care for the tadpoles, but if you have the chance to neutralize any chlorine, that would help them, too.

Joanna: Tomorrow, I will get some neutralizer from the pet shop which isn’t far from my home. I don’t mind doing this. As a child I always loved frogs/toads. My favourite book as a child was The Princess and the Frog, so if I can save at least one or more, I will be happy and I will have my frog!

Joanna: I really do think that what I have are either frogs or toads. I wouldn’t want them to be salamanders. I hadn’t heard of them, so I looked them up and they look a bit scary to me.

Tom: One of the nice things about doing this website is that I keep learning things I didn’t know. For example, I was unaware that England had so few salamanders. In fact, some people would say that England has no salamanders. What it does have is three species of newts. Personally, I consider newts to be salamanders, and they are in the family Salamandridae, but they are in their own subfamily, the Pleurodelinae, so taxonomically, they are somewhat distinct. England has relatively few species of native amphibians, presumably because after the last ice age, England was fairly quickly separated from the rest of Europe by the English Channel and therefore cut off from the surviving populations of amphibians that recolonized most of Europe. 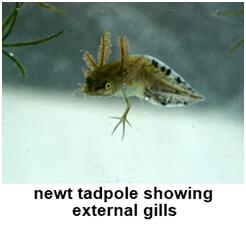 If you get a chance to take a picture of your tadpoles, send it in. You can tell newt tadpoles from frog or toad tadpoles in England because newt tadpoles have visible external gills, as you’ll see in this photo. Also, newt tadpoles develop their front legs before their hind legs. Frog and toad tadpoles develop back legs first. The most likely frog found in garden ponds in England is the aptly named common frog (Rana temporaria). The other, less likely, possibility is the also aptly named common toad (Bufo bufo), but they prefer deeper waters for breeding, and their tadpoles are less commonly found in garden ponds, so unless your tadpoles have gills, it’s most likely you’ll get your frogs.

By the way, for the most part, salamanders and newts shouldn’t worry you. They are generally small, slow moving, harmless creatures. There are a few large salamander species that live in big rivers, but not in England.

What is this mud creature?

What are these tiny eggplants?

Where Does Trash End Up?