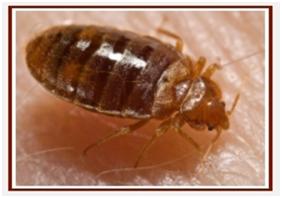 The Short Answer: There truly are more bedbugs (Cimex lectularius) in recent years. The trend began about ten or fifteen years ago, and has been accelerating. Of course, bedbugs have also gotten a lot more press lately, so the hype may be running ahead of the reality, but unfortunately, the reality is not too far behind. The use of DDT and other pesticides to treat bedrooms for bedbugs 30 or 40 years ago reduced the occurrence of bedbugs to a pretty low level in the developed world. They were never gone completely, however, and they continued to be common in parts of the developing world. Now the little bloodsuckers are making a big comeback all across the globe.

More Information: The resurgence of bed bugs in recent years has been attributed to several reinforcing trends:

The combination of increased recolonization, reduced effectiveness of control methods, and the fact that it took a while for the public, government, and the pest control industry to recognize that bedbugs were back, has created a serious problem that will now be difficult to contain.

What to do about bedbugs: Here are a few sites with good information on how to control bedbugs:

The Weird Science: Bedbugs practice one of the animal kingdom’s most odd (and to some, disturbing) mating behaviors: traumatic insemination. Instead of inserting sperm in the female’s genital tract as happens in most insects, male bedbugs avoid the genital tract entirely and pierce the female’s abdomen with a needlelike appendage called a paramere. They then ejaculate sperm directly into the abdominal cavity of the female. The sperm travel through the abdominal fluid to the ovaries, where fertilization takes place. The evolution of this bizarre sex behavior is assumed to be a result of extreme competition between the sexes. In many, if not most, animals, the fertilization interests of males and females differ. For example, a female’s interest might be to spread out fertilization and pace her egg laying to allow the largest number of offspring over her full lifetime. A male who mates with her once and may never even encounter her again, however, may hope to fertilize all her eggs to maximize her reproduction using his sperm, even if doing so causes her to lay so many eggs at once that it reduces her lifespan and therefore her lifetime reproduction.

There is also the phenomenon of “female choice,” where the reproductive interest of the female is to have her eggs fertilized by the “best” males and not by other males. Throughout the animal kingdom, females often choose the males with which they will mate. In other species, however, that’s not possible, and females can be mated with multiple males against their interests. In some of those species, females have evolved the ability to “choose” after the act of copulation. In many insects, for example, females have the ability to store sperm, and have a mechanism for using some sperm to fertilize their eggs and not other sperm. This allows what is called “cryptic female choice.” Even though it may seem that females are not exerting any choice over which males mate with her, by choosing which sperm fertilizes her eggs, she can choose the “best” males to father her offspring.

This sets up conflict, however, between the fertilization interests of females and males and an evolutionary incentive for males to find ways to thwart cryptic female choice. In some insects this is done by males plugging the female’s genital tract after mating. In other cases a male guards the female after mating to prevent access by any other males.

In bedbugs, it’s possible that males are thwarting cryptic female choice by literally going around the female’s genital system. With bedbugs, a female can only lay eggs after she secures a blood meal. Once she does, all the local males try to mate with her and by using traumatic insemination, they attempt to get around cryptic female choice. Again, this sets up an incentive for females to reassert control and in some bedbug species, females have actually evolved a secondary genital system at the site where males typically pierce the abdomen. This allow the females to once again control which sperm fertilize their eggs. And the evolutionary arms race continues.

Bedbugs are members of the Hemiptera, an insect order that includes other insects with sucking mouthparts, such as aphids, cicadas, and shieldbugs. For reasons that are not well understood, the forces that lead to the evolution of traumatic insemination seem to be at least somewhat common in the Hemiptera. Though it is not at all a common means of fertilization, evolutionary scientists believe it has evolved independently at least three times in the Hemiptera. Traumatic insemination can also be found in some species of fruit flies, some spiders, and some nematode worms.