The Short Answer: Our trusty spider expert Mandy Howe at spiders.us read the above description and suggested a species in the genus Castianeira, and based on the 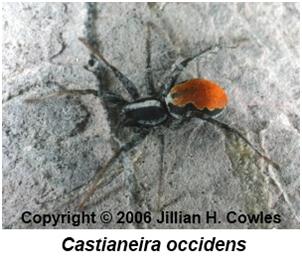 location and orange abdomen, probably one of these three: Castianeira crocata, Castianeira descripta or Castianeira occidens. When I sent Robert pictures of these spiders, his response was, “That’s it!”

C. crocata, C. descripta and C. occidens look roughly similar and all three are characterized by a highly visible red/orange abdomen. Without a photo or the specimen, it’s impossible to say which of these species was hanging out in Robert’s closet, but it was almost certainly one of them.

More Information: Many of the spiders in the Castianeira genus are “ant mimics,” meaning their bodies, and sometimes their behaviors, seem to imitate the shape and coloration of ants (and some wasps). Why would spiders imitate ants? There are at least two reasons: to be able to approach ants so as to prey on them, or to put off predators by imitating ants that don’t taste good or that have a painful bite or sting. The imitation of an unpalatable species by a palatable species is called Batesian Mimicry. It’s easy to see why any predator that doesn’t like the taste of weaver ants, shown in the photo below (left), or is wary of their bite, would avoid the ant mimic spider shown beside it (Myrmarachne plataleoides). Batesian mimicry turns out to be fairly common among insects and other arthropods, and imitating ants is a common ploy. For example, in addition to spiders that imitate ants, there are beetles that imitate ants, flies that imitate ants, and even praying mantises that imitate ants.

So what are the orange-backed Castianeira spiders imitating? Most Castianeira spiders imitate ants, but it appears that the orange-backed species are imitating “velvet ants,” which are not actually ants at all.  Velvet ants are wasps. Female velvet ants are wingless and since wasps and ants have similar body shapes, it’s not surprising that people are fooled. 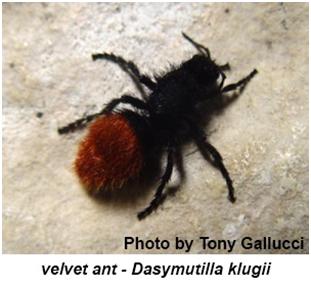 And if you look at this picture of the velvet ant, you can see that it has an orange abdomen, like Castianeira occidens and the other Castianeira species mentioned above. Velvet ants have a very nasty sting (remember, they are really wasps), and because of their store of sting toxin, apparently, they taste terrible to birds. Castianeira spiders probably escape predation by imitating them.

The Puzzle – Imperfect Mimicry: But a closer comparison of the spider and its model shows that beyond a vaguely orange abdomen, the mimicry isn’t at the same level as that of the ant mimic copying the weaver ant in the photo above. Biologists call the Castianeira/Velvet Ant system a case of “imperfect mimicry,” and it presents an evolutionary puzzle. It’s fairly straightforward to imagine how natural selection can hone mimicry to make it more and more exact. But why does that process seem to have been truncated with Castianeira imitating velvet ants?

In recent decades several hypotheses to explain imperfect mimicry have been suggested:

As you can see, there are quite a few theoretical possibilities that might explain imperfect mimicry. One recent study suggests that the most likely factors are the weakening of selection as mimics become more perfect and the balancing of the costs of perfect mimicry. It may also be that multiple factors are at play in different cases of Batesian mimicry. In any event, the Castianeira spider that fell out of Robert’s closet apparently didn’t fool him. He correctly identified it as a spider and not a velvet ant. 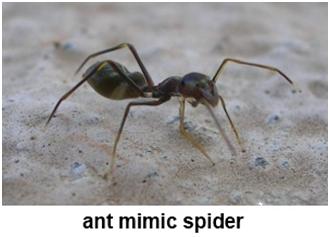 But how many of us would look at the creature to the left and correctly identify it as a spider (look closely at the “antennae” and you’ll see that they are actually the front two legs of the spider)?  That’s because this is another close-to-perfect Myrmarachne ant mimic spider like the yellow one shown above.

Thanks to imperfect mimicry experts Tom Sherratt and Chris Hassall at Careleton University in Ottowa for their help.

Cite this article as: Pelletier, TC. (July 14, 2012). What is this orange backed spider? Retrieved from https://askanaturalist.com/what-is-this-orange-backed-spider/ on April 5, 2020.

2 thoughts on “What is this orange backed spider?”