The Short Answer: The genus Hapalochlaena, the blue-ringed octopuses, are some of the most venomous animals on earth – and some of the most beautiful as well. There are about ten species, found throughout the Pacific from Japan to Australia. These guys aren’t very big, with a body about the size of a golf ball, but you don’t want to pick a fight with them. You might not even notice the bite, but within minutes you’ll begin to feel 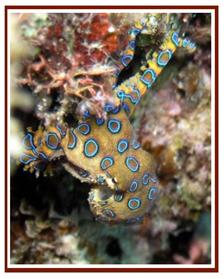 tingling in your tongue, and soon you’ll be paralyzed, including the muscles that move your diaphragm. Without a moving diaphragm, you’ll soon suffocate, of course. The heart is not as immediately affected, and the toxin wears off after a few hours, however, so if mouth to mouth resuscitation or artificial respiration is begun quickly, you might survive. 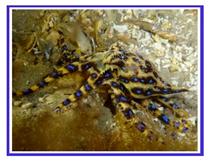 University of Melbourne, has completed research that shows that the genes for toxin production are common to octopuses, squid, and cuttlefish. This suggests that toxin production evolved in one of the ancestors to this group and it’s probably that all members of the group are venomous to some degree. They’re all predators, so it’s likely they all use toxin to immobilize and kill prey. No one has yet surveyed all the 300 or so species of octopuses to ensure that the toxin genes are actively producing venom in all of them, but the Venomdoc, as Dr. Fry is sometimes called, points out: “This is all consistent with the well-documented, easily observed predatory ecology of octopuses drilling through the side of bivalve shells, injecting ‘something’ into it, the bivalve dying, the shell opening, and the occie making a nice meal of the contents.”

More Information: The toxin that makes the blue-ringed octopuses so dangerous is tetrodotoxin (TTX), one of the most dangerous substances known. Tetrodotoxin is present in many of the world’s most poisonous animals, including pufferfish (source of many sushi-related poisonings), some starfish, some crabs, some marine snails, some poisonous frogs, many other animals and even some marine algae. Most evidence suggests that animals don’t make the toxin, however. The source of tetrodotoxin is bacteria.

Although very little is known about the details, the assumption is that the bacteria are symbiotic with the animal. The Blue-ringed octopus harbors the bacteria and may encourage its growth, and the bacteria earns its keep by producing tetrodotoxin. Blue-ringed octopuses use TTX to paralyze and kill prey, but even more so, for defense. TTX found in the salivary glands is injected into a blue-ringed octopus bite, but Dr. Fry points out that the highest concentration of TTX is in the ends of its arms. Presumably, this is the first place a potential predator would attack. The predator gets a mouthful of TTX, and is rapidly paralyzed and therefore unable to finish its attack.

Scientists who study toxins in nature make a distinction between venom, which is a toxin an animal actively introduces into another animal, either prey or predator; and poison, which is a toxin delivered when an animal or plant is eaten or contacted. So a cobra and a scorpion are venomous. And a mushroom and poison ivy are poisonous.

Back to octopuses. Dr. Fry believes all octopuses produce their own toxins, which they inject when they bite. So it’s accurate to say they probably are all venomous. Blue-ringed octopuses, however, also harbor tetrodotoxin-producing bacteria, which they use in their bite and also to make themselves deadly to eat. So while all octopuses are probably venomous, the various blue-ringed species are both venomous and poisonous. They may look small and beautiful, but they pack some powerful weapons.

Here are links to a couple of Youtube videos of blue-ringed octopus. In this first one, notice how the octopus changes color. The blue rings are probably a warning to other animals that “I’m poisonous, so don’t try to eat me.” Also, early on in the video, the octopus plants itself on a rock, takes on a squat shape and curls up two tentacles and wiggles the very ends. I wonder if it is trying to imitate another animal to confuse the photographer.

Trivia: According to most dictionaries, the plural of octopus should be octopuses, not octopi. Octopi might be correct if octopus were of Latin origin, as you might expect from the “…us” ending. But in fact, the word is from Greek, not Latin, and therefore should be pluralized by adding “…es” just as you would with any other non-Latin Anglicized word that ends in an s. However, most dictionaries also say that “octopi” has become an alternative pluralization.

Cite this article as: Pelletier, TC. (September 4, 2010). Do Octopuses Have Venom? Retrieved from https://askanaturalist.com/do-octopuses-have-venom/ on July 8, 2020.