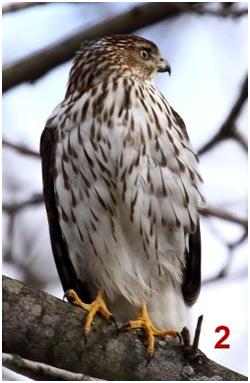 We know this is a juvenile accipiter because of the vertical streaking on the breast. Adults of all three species have horizontal barring on the breast. The sharp white breast feathers, with very distinct vertical streaks, is most like a Cooper’s Hawk (Accipiter cooperii). A juvenile Sharp-Shinned’s (Accipiter striatus) breast is messier, and though a juvenile Northern Goshawk (Accipiter gentilis) has similarly crisp streaking, it is usually on a lightly buff background. Without knowing how big it is, it’s possible this could be a juvenile Northern Goshawk, but a juvenile Goshawk should also show a darker brown patch behind and below the eye and a more distinct white stripe over the eye. I’m not 100% sure, but I’m going with Cooper’s with a possibility of Goshawk. Definitely not a Sharp-shinned. 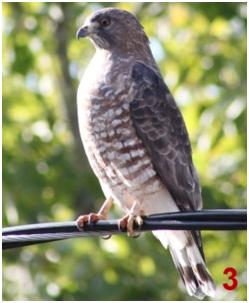 In this case, I think the answer is neither. The clue here is the tail. The hallmark of the accipiters is a long tail compared to other raptors. Notice that in this bird the tail seems normal bird tail length. Once we decide this bird is not an accipiter, the dark bank near the end of the tail, with a white stripe of about the same width, suggests Broad-winged Hawk (Buteo platyperus). I’m pretty sure this is a Broad-wing. The Broad-winged Hawk is in the genus Buteo, not Accipiter. Buteos are generally larger and thicker hawks that hunt rodents, compared to the Accipters, which are generally smaller, more agile bird-hunters. The Cooper’s Hawk and Broad-winged Hawks are about the same size, however, and Broad-winged Hawks do look a lot like Cooper’s Hawks. The key field mark is the short tail.  (Author’s note:  I had originally suggested this was a juvenile Broad-winged hawk, but it was pointed out that this is an adult Broad-winged Hawk.) 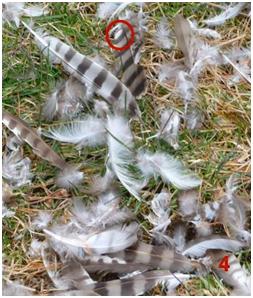 4. Cooper’s or Sharp-Shinned – And Who Killed It? Ali, Nova Scotia, Canada

First of all, nice call on this being an accipiter. I’m pretty sure that’s correct. If you go to this great U.S. Fish and Wildlife feather atlas (fws.gov/lab/featheratlas/browse.php) it shows you high quality photos of feathers from many of the birds of North America. And although many birds have barred feathers like these, as far as I can tell, only the accipiters have banding that crosses the central quill of the feather and stays the pretty much the same. Compare these feathers from a Broad-winged Hawk and a Sharp-shinned Hawk. Note that in the Broad-wing feathers the shape of the black and white is markedly different on each side of the central quill.

As to the “Who Done It?” the interesting answer is, “Possibly a Cooper’s Hawk!” Predators often compete violently when their hunting ranges overlap, especially if they are after the same prey. Sharp-shinned Hawks and Cooper’s Hawk are both fast and agile flyers that hunt other birds. And Cooper’s Hawks have been known to kill and eat their Sharp-shinned competitors. Also, Cooper’s Hawks often pluck their prey at the spot of the kill before flying off with it.

There are other hawks that might kill a Sharp-shinned, including Red-Tailed Hawks (Buteo jamaicensis), Northern Goshawks, and Peregrine Falcons (Falco peregrines), but it’s more interesting to speculate that this bird was killed by its close accipiter relative, the Cooper’s Hawk. So I think we need to bring any local Cooper’s Hawks in for questioning.

A Warning: Both the U.S. and Canada have laws that make it illegal to possess the feathers of most birds, especially raptors like hawks and eagles, unless you have a special permit. It doesn’t matter whether you killed the bird or just found the feathers on the ground. These laws were passed in response to the decimation of bird populations for the purposes of harvesting feathers in the early 1900s. For more information see http://www.fws.gov/migratorybirds/mbpermits.html. I doubt that Fish and Wildlife has any interest in prosecuting people who pick up a pretty feather on a walk, but you should be aware that technically, it is illegal to keep any feathers from birds covered by the Migratory Bird Act. Exceptions include most non-native species (starlings, house sparrows, pigeons, etc.) and most game birds (many ducks and geese).