The Short Answer: Kelly, the bird in your picture looks like a Sharp-shinned Hawk (Accipiter striatus) to me.

More Information: Your question is a very common one for birders. Cooper’s Hawks (Accipiter cooperii) and Sharp-shinned are closely related and very similar small hawks. They both prey on birds. Their ranges overlap over most of North America.

The Cooper’s Hawk is considerably larger, about the size of a crow, while a Sharp-shinned Hawk is closer to the size of a Blue Jay. But as with most raptors, females are considerably larger than males, and a large female Sharp-shinned Hawk is about the same size as a male Cooper’s Hawk, so unless you have the two species side by side, or the bird is definitely crow-sized, it’s difficult to use size to separate the two. In Kelly’s photograph, there are few size cues, so size isn’t much help here. 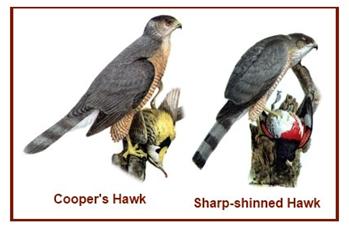 One of the most easily noticed differences between the two birds is that the Sharp-shinned Hawk’s tail is squared off when resting, with the outer feathers slightly longer and a small cleft in the middle, and a thin white tip. A Cooper’s Hawk’s tail at rest is rounded, with a larger white tip. It’s on that basis that I feel pretty confident in saying that Kelly has taken an excellent picture of a Sharp-shinned Hawk.

For more detailed descriptions of the two, the Cornell Lab of Ornithology has excellent pages on each species, where you can also hear their different songs:

Added on April 1, 2013 – There is a nice couple of photos at this site that show a Sharp-shinned and a Cooper’s Hawk flying overhead:  http://projectfeederwatch.wordpress.com/2012/05/03/sharp-shinned-hawk-versus-coopers-hawk/

5 thoughts on “Cooper’s Hawk or Sharp-Shinned?”