What is this strange goose?

The Short Answer: This is a hybrid goose. Probably a cross between a Can 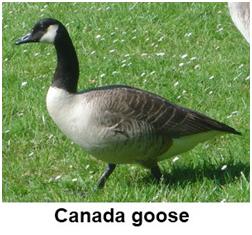 ada goose (Branta canadensis) and a snow goose (Chen caerulescens) or possibly one of the domesticated goose species that are raised in the United States. Hybridization among goose species is fairly common in the wild, b 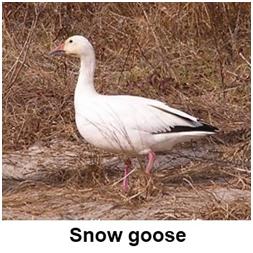 There are two probable methods of hybridization in geese. One is when a male goose copulates with an unwilling female of another species. I wrote recently about forced copulation in Mallard ducks, and much of what I wrote there applies to geese. As with ducks, forced copulations are relatively common in geese compared to other birds. Most forced copulations are within species, but males of some species will attempt to copulate with any similar species and some of these pairings might result in fertilization and hybrid goslings.

Alternatively, we occasionally see males and females of different species pairing up and mating and raising an entire brood of hybrid goslings. But why would they choose each other over members of their own species? Many goose and duck species “imprint” on their parents shortly after hatching. When they become mature, they search for mates that match the adults they saw in their first days after hatching. Normally, the first adults the newly hatched goslings see would be members of their own species and the imprinting process therefore prevents cross-species pairs.

But there is another behavior that is common in geese that can upend this process. Female geese often lay their eggs in the nests of other geese.  This allows a female goose to lay more eggs and have more offspring than she could protect or care for by herself.  Usually they lay their extra eggs in nests of the same species, but sometimes, by mistake or possibly on purpose, females lay eggs in the nests of other species of geese. When eggs laid in the nest of another species hatch, they may imprint on the parents of the “host” species, and the gosling may grow up to search for a mate from the species of its host parents – and not one of its actual species.

The result is a cross-species pairing. The work of Dr. Christoph Randler at the University of Leipzig suggests that this process of egg sharing and the resulting incorrect imprinting is the primary method by which hybridization occurs in geese.

But even if this kind of cross-species mating happens, it seems unlikely to create viable offspring. After all, the snow goose and Canada goose are separated by millions of years of evolution. How can they interbreed? Scientists who study how species remain isolated from each other talk about two kinds of barriers to hybridization: pre-zygotic and post-zygotic. Pre-zygotic barriers are things that tend to prevent the creation of a viable zygote. (A zygote is the cell formed by the merger of an egg and a sperm.) One example of a pre-zygotic barrier is geographic separation. If two species are on different continents and never come together, they can’t interbreed. Another example is courtship behavior. For example, if a female bird will only accept a male after he performs the correct song and dance routine, males of other species that don’t perform that routine won’t get the opportunity to mate with her. Imprinting among geese is another pre-zygotic behavioral barrier. Most geese will only mate with a member of the opposite sex who looks like the parents it saw after it hatched.

Post-zygotic barriers, on the other hand, are the result of incompatibility between sperm and egg. A male of one species may mate with a female and the egg and sperm join to create a zygote, but if the zygote doesn’t develop correctly, it won’t produce a viable embryo or juvenile.

It turns out that while birds have many pre-zygotic barriers to hybridization, they have fewer post-zygotic barriers than mammals. So if a male goose gets through all the pre-zygotic barriers by forcing a female goose of another species to copulate with it, chances are pretty good the zygote created will develop into a fully functional hybrid goose. Or, if the imprinting process goes awry because a female lays extra eggs in the nest of a female of another species, chances are that when the offspring chose a mate of the host species, the result will be fully functional hybrids.

If a male mammal of some species gets past pre-zygotic barriers and mates with a female of another species, chances are slim that the resulting zygote will develop. But why is that?

It may be a combination of factors. Because a mammal mother is connected to her developing offspring by a placenta, her immune system has direct contact with the developing embryo. If the embryo is too different from her, her immune system may well attack the embryo. Birds don’t have this issue because once the mother bird seals the fertilized egg into a shell and she lays it, her immune system no longer has any contact with it. It also appears that mammals rely more heavily on regulatory genes than birds do. These genes can diverge quickly over evolutionary time and create large differences in development. Mixing the regulatory genes of two different species in a single zygote probably causes havoc that results in a non-functioning embryo.

Also, birds as a group have an unusually stable arrangement of chromosomes, which means that chromosomal incompatibility creates fewer barriers to hybridization. In meiosis, chromosomes from the father and mother pair up in the process of creating a viable zygote. If the parents’ chromosomes don’t match, this usually creates problems. The well-known infertility of mules, a cross between a horse and a donkey, for example, is at least partly because horses have 32 pairs of chromosomes and donkeys have 31. The genetic information is very similar, it’s just arranged on chromosomes differently. Most mammal chromosome numbers fall in the range of 18 to 30 pairs (humans have 23). Most birds on the other hand, fall in a smaller range of 38-40 pairs, and all geese have 40 pairs. This means that problems with chromosomal pairing are less of an issue in hybridization of goose species.

For all these reasons, you are far more likely to see a snow goose-Canada goose hybrid than you are to see a hybrid between two species of mammal.

What is this Eel-Like Fish From India?