Bright yellow mold – Or is it dog vomit? 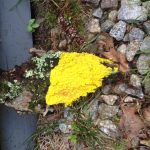 I saw this incredibly bright stuff on some maple bark, in a wooded area, after four or five rainy days in July in New Hampshire.  I think the producers of “Stranger Things” would be interested.  Do you know what it is, and is it toxic?  Lawrence

Is a banana a fruit or an herb?