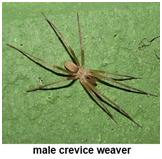 The Short Answer: First, before we can talk about this spider, we’ll have to refer to it as “she” because Eric Eaton at Spiders.us (also Spider Identification on Facebook) identified this as a female crevice weaver (Kukulcania hibernalis), also known as the southern house spider. The male crevice spider is considerably thinner and has somewhat longer legs. In addition to having different body shapes, males and females of this species have different lifestyles as well. The female crevice spider makes webs in cracks and crevices, in accordance with the species’ name. The male crevice weaver however, is a wanderer who hunts for prey without making a web.

Not a Brown Recluse: In addition to being so different in lifestyle from the female crevice weaver, the male crevice weaver has another distinction in that he is one of the spiders most frequently mistaken for the notorious brown recluse (Loxosceles recluse). If you compare the picture above with this picture of a brown recluse below, you can see

the similarities. Richard Vetter, a spider researcher at the University 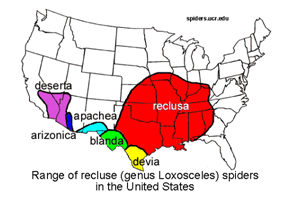 of California, Riverside, is on a one man mission to reduce mis-identification of brown recluse spiders by doctors and emergency crews. For example, it’s not uncommon for doctors in the northern parts of the United States to identify the cause of a rash or infection as a brown recluse bite even though the northern limit of the spiders’ range is about the middle of Iowa. Dr. Vetter’s range map shows that the brown recluse and other members of the Loxosceles genus (also dangerous) are only found in southern and western parts of the United States. Yet “official” reports of brown recluse bites come from all over the country.

Vetter has even had bite victims vehemently insist he must be wrong in his identification of a spider photo because “the doctor said it was definitely a brown recluse,” even though, unlike Vetter, very few doctors

are trained to identify spiders.

One problem is that the general rule that people use to identify brown recluses is not that helpful. Everyone knows to look for the hourglass shape for a black widow, and most people know to watch for a violin shape for a brown recluse. While most brown recluse spiders do show a clear violin-like shape on the cephalothorax (the large body segment that includes the eyes), many other spiders show indistinct coloration on the cephalothorax that could be mistaken for a violin. So in the end, the violin shape is not a definitive field mark.

Vetter suggests that the surest way to identify a brown recluse is to look deep into its eyes. As shown in the picture to the left, all members of the Loxosceles genus have six eyes, in three pairs arranged in an arc, whereas almost all other spiders have eight eyes, variously arranged. If you see a spider in your yard, you might not want to get close enough to check its eye pattern, making Vetter’s advice not very useful. But Vetter’s goal is to reduce misdiagnosis of skin conditions in doctor’s offices. If a patient shows a doctor a dead spider and says “I think I was bitten by a brown recluse,” it’s simple enough to put the spider under a magnifying glass to check the eye pattern. This is important because misidentifying the cause of the rash as a brown recluse may cause the doctor to ignore other possibilities such as bacterial infections.

On his website, http://spiders.ucr.edu/recluseid.html, Vetter gives the following guide to identifying a brown recluse:

So thanks to Michelle for sending in the lovely female crevice weaver. Living in Richmond, she is well out of the range of the brown recluse, so she can rest easy. For people who live within the brown recluse’s range, if you think you’ve been bitten by a brown recluse, don’t take your doctor’s word for it. Snap a picture and post it at Spider.us or one of the other sites that will identify spiders. You’ll get a quick answer. Generally, it’s more likely to be a male crevice weaver or some other imitation recluse than the real thing.

One thought on “What is this spider – and how to identify a brown recluse?”