The Short Answer: These are earthworms mating, and I can tell you that they are the common earthworms called nightcrawlers (Lumbricus terrestris), the only species known to mate above ground. Nightcrawlers, like many other earthworms, are simultaneous hermaphrodites, meaning that each worm is both sexes at the same time. When two worms mate, each provides sperm to the other. The worms then store the sperm in special cavities called spermathecae, where the sperm can survive for as much as six months. After the worms separate, each produces cocoons in which they deposit one or two eggs and some of the stored sperm.  Nightcrawlers, by the way, are not native to New York.  The species was introduced from Europe, where it is usually called the common earthworm.

More Information on worm sex … a story of boy/girl meets boy/girl: Nightcrawlers live in burrows they dig 1-3 meters (3-9 ft.) into soil. They come out at night (hence the clever name) and reach out to grab leaves and plant debris, which they drag back into the burrow for later digestion. When a boy/girl worm’s thoughts turn to love, it stretches out to find another boy/girl.  Often, this involves stretching out to visit the other worm’s burrow with the head, without entirely leaving the own burrow with the tail.  Some researchers believe the purpose of this is to gauge the distance to and the size of the other worm.

Why would this be important?

In many animals that produce large numbers of eggs, males try to mate with the largest females because usually, the larger the female, the more eggs she produces. In nightcrawlers, the situation is a little different, but the end result may be the same. It doesn’t appear that larger females produce more eggs, but they do produce larger eggs, which hatch into larger young, which presumably have greater survivability. So it’s probably still a benefit for the boy side of each worm to want to mate with a large female. Some researchers, however, believe worms may actually prefer smaller partners so there is less chance of being pulled out of their burrow during mating.

If you’ve ever tried to catch a nightcrawler, you know that to escape they quickly back down their burrow. If you can catch the head end before it disappears, it’s still not an easy task to get the worm out. They have stiff hair-like setae on many of their segments, with which they hold tight to the soil. However, if they are caught above ground, completely out of the burrow, it’s pretty easy for a person … or a worm predator … to simply pick them up.

That’s probably why when two worms find each other in the dark, each stretches out from its burrow. “Come on over to my place!” “No, you come on over to MY place!” The end result is typically that the worms mate somewhere in the middle, on the surface.

If the worms decide the time is right, they align their undersides and secrete a mucousy substance that holds them tightly against each other. But just to make sure, each worms goes a little further to keep the other from changing its mind. Remember those hair-like setae that help a worm grab hold of its burrow? The 40 or so setae on the segments that come in contact during copulation are specially adapted to actually puncture the other worm. The worms essentially nail each other together. After wrapping each other up with slime and nailing each other together for an hour or more, the worms exchange sperm and then begin to separate. But lest you get the impression that this is a gentle event, if you put your ear close to separating worms, you can actually hear the tearing free of all those setae. Ouch! And in the wriggling around to get free of each other, one worm – usually the smaller of the two – will sometimes be pulled out of its burrow. You can see why they each try to stay close to their own burrow so as not to be the one who gets pulled out and left exposed at the end of it all.

With the spermathecae loaded up with sperm, each worm then produces 2-3 cocoons a month. The clitellum, the 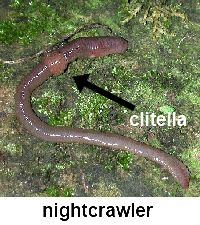 thickened part of the worm, near the head end, secretes the outside of the cocoon around the worm. As the worm slips out of the newly formed cocoon, an egg and sperm are released. These end up inside the cocoon, which closes off and hardens and is left in the soil to hatch.

Under good conditions, nightcrawlers will mate every 7-11 days. But if they are unable to mate, they’ll continue to produce viable cocoons and eggs for as much as six months, although the hatching rate of the eggs does decrease as time goes on, presumably because the sperm dies or degrades or is simply used up. Because sperm can last well past the time between matings, this sets up a conflict between the sperm of last week’s mate and this week’s mate. There’s evidence that worms use the mating setae puncture wounds to inject the mating partner with a hormone that causes the partner to have less interest in mating again … at least until the hormone wears off. If this delays the injected worm from mating for even a few more days, it makes it more likely that the sperm from the worm that injected it will be used instead of sperm from a new mate.

Hard to believe all that action and intrigue was taking place in that picture, isn’t it?

How do all the frogs know I’m coming?

What is this spider – and how to identify a brown recluse?