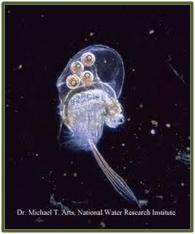 The Short Answer: Both of the Lake Huron experts I contacted suggested that what you saw was Holopedium gibberum, a tiny cladoceran crustacean. Cladocerans, which include other small aquatic animals like daphnia, are part of the zooplankton of lakes and ponds. Like most cladocerans, Holopedium reproduces in two ways. Throughout the summer, females reproduce asexually through parthenogenesis, which means that females lay unfertilized eggs which hatch into more females – no males needed. In Holopedium, the developing eggs are carried in a brood pouch on the back of the female. This brood pouch can be twice as long as the female and looks like a gelatinous fish egg. When the density of Holopedium is high, they can wash up on beaches and look like what Sara saw on the shores of Lake Huron. Towards the end of the summer or early fall, some of the offspring will be male and sexual reproduction occurs. The result of this is fertilized “resting” eggs that survive the winter on the bottom of the lake. When these eggs hatch in the spring, they start the cycle over again.

“Holopedium has recently become more dominant in Lake Huron during late summer and their increase corresponds with changes wrought to the ecosystem by dreissenid mussels (zebra and quagga mussels) that invaded Lake Huron from the Caspian Sea region. The mussels got here via ballast water from ocean going ships. Evidently, the mussels have deprived Lake Huron of nutrients by filtering the lake of food and tying up nutrients in the mussel colonies on the lake bottom. Holopedium is a native zooplankton. It somehow manages to make a living in relatively sterile waters such as Lake Superior and, now, in Lake Huron. An abundance of holopedium is an indication that the water is exceptionally sterile (not very productive).”

Jim suggests that for more information, you can go to his office’s web page:

At the following site, you can watch a trailer for a video about invasive species in Lake Huron: 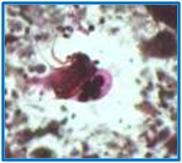 As for animals like Holpedium and other cladocerans, they seem to have figured out how to have the best of both worlds. In the spring and through the summer, their populations can grow rapidly through asexual, parthenogenic reproduction. But when fall comes, their thoughts turn to love, and they begin to reproduce sexually, mixing up their genes and creating new combinations ready to compete in the spring.

For more information on Holopedium, check out this site at Central Michigan University:

Cite this article as: Pelletier, TC. (July 26, 2010). What are these tiny oily beads in Lake Huron? Retrieved from https://askanaturalist.com/what-are-these-tiny-oily-beads-in-lake-huron/ on February 22, 2020.