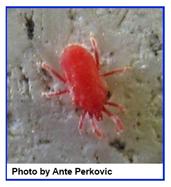 The Short Answer: Rick, those are almost certainly spider mites, which are often red. Though they look like bugs, spider mites aren’t insects, they’re actually eight-legged arachnids, more closely related to spiders than insects. They feed on plant leaves and proliferate in the warmer months. When they are overcrowded, or their host plant begins to die, mated female spider mites will disperse to begin new colonies, and when they begin to disperse, you might see them crawling to find the next host plant. They are also fairly easily blown or knocked off a leaf and then must crawl to find a new host plant. To see videos of spider mites, try these links: 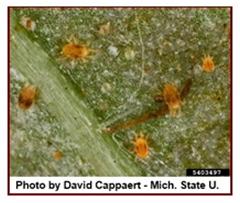 More Info:
The most common of the roughly 1,600 species of spider mites worldwide is Tetranychus urticae, the two-spotted spider mite. It has been carried all over the world on crops and houseplants so that it is now found on every continent except Antarctica. You can find them on the underside of leaves of many houseplants. Two-spotted spider mites can also be a serious problem on crops. They have been documented feeding on over 900 plant species, using their piercing mouthparts to suck the insides out of plant cells. If only a few mites are present, and the plant is otherwise healthy, the effect on the plant is minimal. But spider mites can reproduce rapidly, with each female laying 15 – 100 eggs in her short lifespan. After an egg hatches, it goes through a larval stage, then two nymph stages before it spins a silken web over its head and metamorphoses into an adult. The time from laying to adult is about 10 days. With rapid reproduction and maturity, a single mated female and her offspring can produce millions of offspring in a season, and at high densities, the damage can kill a plant.

Pesticides are rarely effective, and can sometimes make the problem worse because spider mite colonies rapidly develop resistance, and pesticides often kill off predatory mites that can keep spider mite populations in check. In fact, the most effective control of spider mites is to apply predatory mites, which will feed on adults and eggs. Many ladybugs will also prey on spider mites. Predatory mites and ladybugs can be purchased at garden stores or online. (http://homeharvest.com/beneinsspidermites.htm, http://www.planetnatural.com/site/predatory-mites.html)

Spider mites are, in fact, mites and not spiders, but they earned their combination name by their habit of stretching webs on the underside of the leaves. These webs look similar to spider webs. However, while spiders release their silk from spinnerets on their abdomen, spider mites have modified salivary glands in their mouthparts that release silk. The fact that the silk comes from completely different body parts, suggests that the silk of spiders and the silk of spider mites represent two separate evolutionary events. And unlike with true spiders, spider mite webs are not meant for catching prey. In fact, they seem to provide protection from predators. Predatory mites don’t seem to be much bothered by the webs, but many other general predators are more likely to ignore mites under webs. Some spider mites, including our favorite, the two-spotted spider mite, sometimes release silk in a string that catches the wind and carries the spider mite away. This is a way for mated female spider mites to disperse to another plant when the one it is on is being overrun.

Though they are not spiders, spider mites are members of the large class of arthropods called the Arachnids. This group of eight-legged creatures includes true spiders, harvestmen (harvestmen), scorpions, mites and ticks (ticks are actually mites specialized for feeding on vertebrate blood). Because mites are generally small, their numbers and their diversity has been underestimated, but in recent years, the importance of mites has become more clear. A single shovelful of soil may contain dozens of species of mites, and some estimates of the number of mite species suggest that they may rival the insects in sheer numbers, with a million or more species worldwide.

Trivia: The study of mites is called Acarology.