The Short Answer: Debbie, that sounds like one of the many species of burrowing crayfish (also called crawfish or crawdads). They dig tunnels down to dampness or even to the water table. And they push up muddy soil out of their burrow into a mini volcano shape, with a neat hole at the top. They’re generally nocturnal, so during the day, all you’ll see are the volcanoes, which can be quite numerous. I have spent most of my life in New England, where I don’t believe any of our native 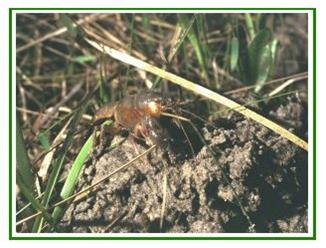 crayfish are burrowers. But when I lived in Wisconsin and Kentucky, they were very common. This site has a checklist of the native species of crayfish in Michigan: http://iz.carnegiemnh.org/crayfish/country_pages/state_pages/michigan.htm. There are two burrowers on the Michigan list, the digger crayfish (Fallicambarus fodiens), and the devil crayfish (Cambarus diogenes). The digger crayfish is primarily aquatic, but sometimes digs burrows out of the water. The devil crayfish, however, is a primary burrower, meaning that it lives most of its life in its burrow. So I’m going to guess that’s what you have. For a picture, go to: http://iz.carnegiemnh.org/crayfish/NewAstacidea/species.asp?g=Cambarus&s=diogenes&ssp

More Info: Burrowing seems to be a good strategy for crayfish, as crayfish all over the world have developed a very similar 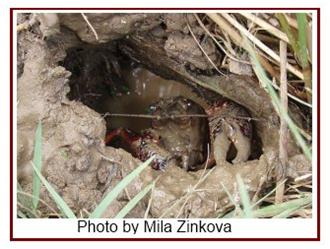 lifestyle of digging complex burrows down to damp or wet soil. Like all crayfish, burrowing crayfish have gills in their abdomen under their shell. The gills are capable of gaining oxygen from air instead of water as long as they are wet.

Crayfish, as you might expect, are classified with the clawed lobsters (Nephropidae. There are over 600 species of crayfish, in three main groupings. The Astacidae and Cambaridae are restricted to the northern hemisphere and centered on Asia and North America, respectively. The Parastacidae are distributed throughout South America and Australia. There are no crayfish native to Africa. The Cambaridae are centered on the Southeastern United States, which has the most diverse crayfish assemblage in the world – more than 300 species, a remarkable number when you realize that they seem to occupy very similar ecological niches. There is also an only slightly less impressive collection of crayfish species in Australia. But that part of the world includes some interesting oddballs, including burrowing crayfish that can live far from any surface water. Then there’s the Tasmanian Giant Crayfish, which can reach 4.5 kilograms (10 pounds) – big even by the standards of an ocean-dwelling lobster. To see a picture, go to: http://yhsbiology.wikispaces.com/Crustacea

Trivia #1: The Tasmanian Giant Crayfish (Astacopsis gouldi) is the largest freshwater invertebrate in the world.

Trivia #2: There are two continents with no native crayfish. One is Antarctica. The other is Africa.

The interesting science: It’s easy to understand why Antarctica might not have crayfish. It’s too cold there, and there is no ice-free fresh water. It hasn’t always been that way, and at least one crayfish has been found in Antarctica, so they probably lived there when the continent was located away from the pole. But why are there no native crayfish in Africa? To read more, click here to go to Curious Nature.net, where you’ll find a companion article about the strange distribution of crayfish species around the world.

Cite this article as: Pelletier, TC. (May 12, 2010). Burrowing Crayfish Retrieved from https://askanaturalist.com/burrowing-crayfish/ on July 8, 2020.