Are There Ducks in Antarctica? 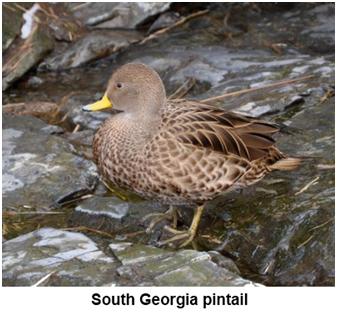 The Short Answer: According to Avibase, the one duck that is occasionally seen in parts of coastal Antarctica is the yellow-billed pintail (Anas georgica). This was confirmed for me by Dr. Peter Convey with the British Antarctic Survey who added that “There are no breeding ducks on the Antarctic mainland (continent or Antarctic Peninsula and offshore archipelagoes).”

So it sounds like the yellow-billed pintail is your mystery duck. It occasionally vacations in Antarctica, but doesn’t stay long enough to breed.

The yellow-billed pintail is one of the most common ducks in South America and is found over most of the western and southern parts of the continent, excluding the Amazon and other rainforest areas. There is also a well-known subspecies, the South Georgia pintail (Anas georgica georgica), which is found primarily on South Georgia, one of the southernmost islands that is not considered to be part of the Antarctic continent. On South Georgia, the ducks are primarily nocturnal and eat shrimp, amphipods, other crustaceans, snails and other invertebrates, as well as marine algae. The nocturnal feeding habits may be an adaptation to predation by the Antarctic skua (Stercorarius antarcticus), a large seabird which catches adult ducks on the fly during daylight hours.

January being summer in the Southern Hemisphere, we are currently in the breeding season for the yellow-billed pintail. The population on South Georgia typically lays five eggs, with two or three clutches possible in a season. In the 19th century, the South Georgia pintail was hunted by the crews of whaling vessels, and these days, they suffer from predation by introduced rats, but the population seems stable.

Sharing South Georgia Island with the South Georgia pintail is the speckled teal (Anas flavirostris). Other far southern islands that have ducks include the Falklands (also called the Malvinas) off the coast of Argentina and Macquarie Island south of Australia and New Zealand. Like South Georgia Island, the Falklands have both speckled teals and yellow-billed pintails as well as several other duck and goose species. Macquarie Island has Pacific black ducks (Anas superciliosa) grey teal (Anas gibberifrons) and non-native mallards (Anas platyrhynchos). None of these other species are known to visit Antarctica, however.

McCracken, K.G. and Wilson, R.E. (2011). Gene flow and hybridization between numerically imbalanced populations of two duck species in the Falkland Islands. PLos ONE, 6(8).

What is a Burrowing Crayfish?

What is this spider – and how to identify a brown recluse?