The Short Answer: This is Araneus cingulatus, one of many types of orb-web spiders. These are the spiders that build the classic dew bejeweled webs that appear overnight.  You can see additional pictures of  Araneus cingulatus at www.bugguide.net.  Though it’s probably true that all spiders have venom that incapacitates their insect prey, most are not dangerous — as long as you don’t have six legs.  Araneus cingulatus is not known to have a dangerous bite.

There is not a lot of information on the behavior of this particular species, which doesn’t have a common name, but the genus Araneus is a large one with many similar orb-spinning members. Females are larger than males, and often exhibit the mate-eating behavior many people associate with spiders. Typical Araneus species are about 1-2.5 cm (1/4-1 inch) with males 1/4-1/3 the size of females. As this lovely green spotted 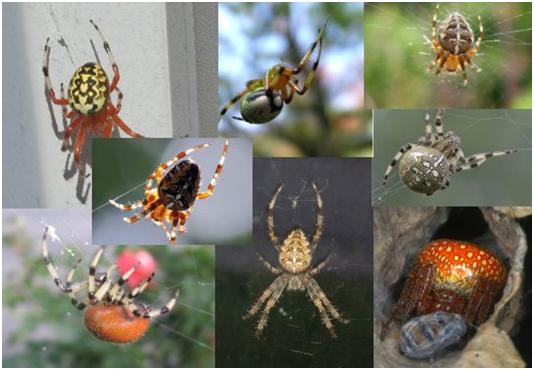 Thanks to Lady Arachnophile, one of the staff members at www.spideridentification.org, who identified your spider for me.

More Information: As so often happens, when I started reading in preparation for answering this question, I came across something very interesting that I did not know. It turns out that most orb-spider webs are not quite round. I never noticed this before, but if look closely at these two webs, you’ll see that the center spot, where the spider sits waiting for insects to become trapped, is slightly above center. You might think this is just random variation, but scientists who have studied this question find that it’s not. Most of these spiders build webs that are pretty consistently asymmetrical – slightly longer on the down side than the up side. And if you observe the spiders sitting in the middle of these webs, you’ll find that most often, they are pointed head down, towards the longer part of the web.

Why would that be so? 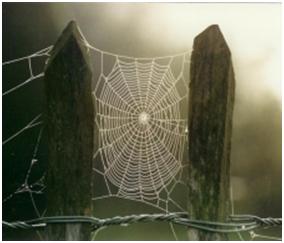 There are at least a couple of possible answers. It might be that it relates to the way spiders build their webs. Maybe it’s easier to build downhill than uphill. Another hypothesis, which seems to be gaining the most support from mathematical models and experimental manipulations of spider behavior, is that it’s about how spiders capture prey. It turns out that just as for people, spiders can run faster downhill than uphill. So they build their webs with a slight downhill bias, which probably equalizes the time it takes to cover the whole web. They probably face in that direction because with the web being slightly larger in that direction, the odds of catching a bug are slightly larger in the downhill direction. And they want to get there quickly before the insect escapes. 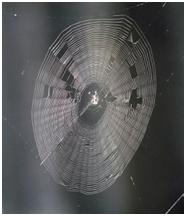 The final answers on this question aren’t in yet, but it seems likely to be one of those examples where natural selection has fine-tuned an animal’s behavior to a remarkable degree.

As I said, I never noticed this before, but I’m going to have to watch for it the next time I see a nice orb-web.

One thought on “What is this Martha’s Vineyard spider?”