The Short Answer: That jelly clump does look a little bit like the freshwater bryozoan blobs we’ve talked about on AskaNaturalist.com. But it doesn’t have the same kind of speckled appearance, and as you say, what’s inside this blob seems fish-like. The other clue that it’s not a bryozoan blob is that this is the wrong time of year (late March). Bryozoans die back during the winter, so this time of year bryozoans would be just starting to come back from the small statoblasts that drop to the bottom of bodies of water in the fall. It isn’t until mid-late summer and early fall that the jelly blob colonies are large enough that people begin to notice them. 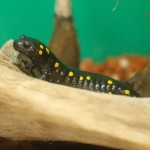 This, however, is the time of year for amphibian egg mass jelly blobs. Ron Altig, an expert on the eggs of amphibians, at Mississippi State University, immediately identified your blob as an egg mass of the spotted salamander (Ambystoma maculatum), one of the more charismatic of the salamanders, as these photos show. When I asked him what criteria he used to identify the eggs, he said, “The relatively large size and particularly the very firm jelly – as in the picture, it does not collapse and run when taken out of the water. The only species in eastern US that does that is A. maculatum. The only similar eggs are those of the northwestern salamander (Ambystoma gracile), which is only found on the western coast of North America from northern California to southern Alaska.”

If you look closely at your egg mass, you can see that the developing larvae already have external gills and possibly front legs. They’ll soon begin leaving the relative safety of their jelly blob to head out into the world. Spotted salamanders larvae are susceptible to being eaten by fish, which is why they typically lay their eggs only in vernal pools that don’t have fish. I don’t know the likelihood that your goldfish will eat them.

Larva or tadpole – front legs or back legs first? Salamanders and frogs are amphibians, and most have a similar life-cycle that includes laying eggs in water, which hatch into an aquatic (swimming) juvenile stage, and finally an adult stage that lives on land. There are many fascinating and bizarre exceptions to this basic three stage land-and-water life-cycle, but the vast majority of salamanders, frogs and toads fit. There is a very big difference, however, in how salamanders develop, compared to the frogs and toads.

Frog and toad eggs hatch into tadpoles, large-headed fish-like swimming creatures that typically eat by scraping bacteria, algae, and microorganisms off underwater surfaces. Though they may begin with external gills, in most tadpoles, the gills become internal. As the tadpole grows, it develops legs, with the back legs appearing first, and then the front. The tail shrinks and the tadpole undergoes a true metamorphosis, rearranging its body from the streamlined, fishlike shape to the squat shape of a tailless frog or toad.

If you’re curious about metamorphosis and need a song to stick in your head for a while, check out this guy, Lucas Miller, who calls himself “The Singing Zoologist.” He writes and sings educational songs for kids. This one is on frog metamorphosis: https://www.youtube.com/watch?v=jR0EPHyo128

This very short video shows time-lapse photography of egg to late-stage larva for the western barred salamander (Ambystoma mavortium), a species that is closely related to the spotted salamander: https://www.youtube.com/watch?v=-evWPl_SD4E

This one shows early egg to tadpole development of a frog species: https://www.youtube.com/watch?v=B3d48VfQHbY

Sources: Thanks to Professor Ron Altig for all his help.[cite]