The Short Answer: Karen, Coyotes (Canis latrans) are nothing if not adaptable, and their social structure varies. In the eastern part of the United States, coyote packs are smaller than in the west, and can often consist of one adult pair and their pups. When the pups grow to adulthood, they may all disperse. This creates a lot of “transient” coyotes, who are moving in search of an open territory. One study that put radio collars on coyotes found that about a third of them quickly disappeared, meaning they probably were transients who were only moving through the area. Also, pack members don’t necessarily stay with each other 24 hours a day. So there are many opportunities for you to see a single adult coyote. There’s no way to say for sure that’s what you saw, but there’s no reason that you couldn’t have seen a solitary coyote. 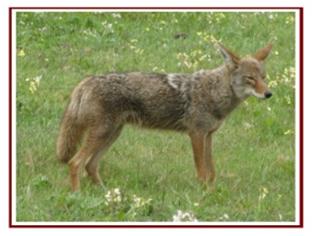 More Information: Coyote packs range in size from two adults to about ten, plus pups. The pack always includes an alpha male and female, and beta adults only very rarely breed unless they ascend to alpha status. Some beta adults will leave a pack in the hopes of finding a better situation, either in an open territory, or with an alpha coyote that has lost its mate. Coyotes breed once a year, in the spring, with litter sizes usually from four to eight pups. They often adjust their litter size to fit the available resources. More food, larger litters. Less food, smaller litters. This presents a challenge when people try to control coyote populations. If you reduce the number of adults in an area, by trapping, or hunting, that increases the food supply for the remaining coyotes, which then increase their litter size, and the population bounces right back.

Coyotes are territorial, so one pack will exclude any other coyotes. One of the ways they do that is by advertising their presence. That’s probably a major reason for their howling. I’ve often heard coyotes howling and thought “It sounds like a large pack of coyotes killing something.” But I had an experience once that changed my interpretation. At the time, I was on the board of directors of a small local zoo. We had an early meeting, and to beat the traffic, I arrived even earlier than I needed to. That meant I was killing time, wandering around the zoo at about 7:30 in the morning. As I approached the large coyote enclosure, the zoo’s pair began howling. I had never been that close to howling coyotes before and what surprised me was that it sounded just like what I had always interpreted as “a large pack of coyotes killing something.” But it was only two animals, sitting on opposite ends of their enclosure, singing to the morning.

So their howling song can be misleading. You might think you have a large pack living near you, when it’s just a pair.

What are these clear jelly blobs on the beach?

Is a banana a fruit or an herb?

How to save these tadpoles?

Egg sacs under a dock?