The Short Answer: It’s all about heat exchange, and the smaller the temperature difference between two objects, the more slowly heat will be exchanged. Ducks, as well as many other birds, have a counter-current heat exchange system between the arteries and veins in their legs. Warm arterial blood flowing to the feet passes close to cold venous blood returning from the feet. The arterial blood warms up the venous blood, dropping in temperature as it does so. This means that the blood that flows through the feet is relatively cool. This keeps the feet supplied with just enough blood to provide tissues with food and oxygen, and just warm enough to avoid frostbite. But by limiting the temperature difference between the feet and the ice, heat loss is greatly reduced. Scientists who measured it calculated that Mallards lost only about 5% of their body heat through their feet at 0o C (32o F) 1. To put this in perspective, the rest of the duck is covered with feathers and in contact only with air, not ice, but because the body is relatively hot, 95% of the heat loss is from 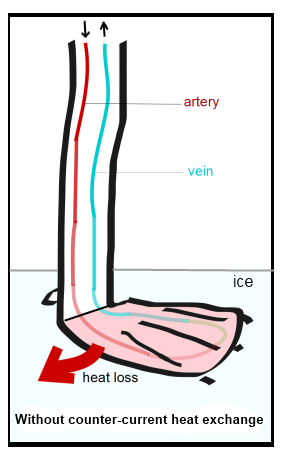 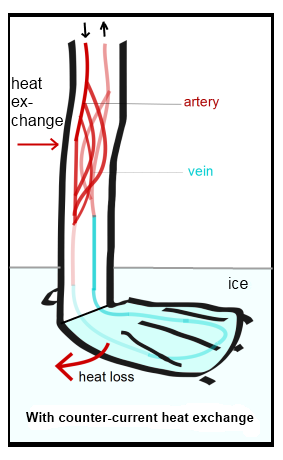 the head and body. Meanwhile, the cool feet sit on ice and give up very little heat.

More Info: In the diagram to the left, without counter-current heat exchange, warm blood makes it all the way to the foot. This keeps the feet considerably warmer than the ice the duck is standing on. Remember that heat flow is roughly proportional to the temperature difference. With a large temperature difference, there is a large flow of heat from the foot to the ice.

In the diagram to the right, you’ll see that multiple branches of the artery are in close contact with branches of the vein. This intertwining of arteries and veins is called retia (singular – rete tibiotarsale). Because heat flows from the arterial blood to the venous blood, the arterial blood becomes colder and the venous blood becomes warmer. Less warm blood gets to the foot, keeping the foot cold and reducing the temperature difference between the foot and the ice. This reduces the flow of heat from the duck to the ice.

Bird’s legs and feet are relatively free of soft tissue and even the muscles that operate the foot are mostly located higher up in the leg and connected to the bones of the feet with long tendons. Because there isn’t much soft tissue in the lower legs and feet, there is less need for warm blood. Many birds also have valves in their leg arteries that control the blood flow, and there is evidence that some birds can pulse the blood to the foot. Every once in a while, warm blood flows to the foot to make sure it doesn’t suffer from frostbite. And when you see a duck or other bird standing on one foot in the cold, this probably serves to protect tissues and reduce heat loss even further because the one leg that is tucked up under insulating feathers gets a chance to really warm up and recover from any potential cold damage, and with only one foot on the ice, the surface area in contact with a cold surface is cut in half!

This may explain why out of 66 bird species dissected by Uffe Midtgard2, the one with the most elaborate retia was not a cold weather bird, but the Greater Flamingo, with 62 arterial branches intertwined with 40 venous branches, compared to 19 arterial branches and 24 venous branches in a Mallard duck. That fact aside, for the most part, Midtgard’s findings fit what we would expect, in that birds that live in cold weather habitats tend to have more elaborate retia. Many ducks have relatively complex retia, as do Mute Swans, Ptarmigan and Partridge. Songbirds don’t technically have retia, with intertwined arteries and veins, but they have a system that probably functions in a similar way. As many as eight veins returning from the foot are arranged around one main artery.

By the way, birds aren’t the only animals to have evolved this counter-current blood flow trick. It can also be found in the flippers of whales and sea turtles, some reptiles, and some have even suggested that the proximity of the veins and arteries that supply human arms is a simple counter-current heat exchanger.

Something to Think About: One thing I’ve often wondered about, is whether an animal like a duck is uncomfortable in the cold. We see them sitting on the ice, with their feathers fluffed up, and we imagine that they must be suffering. But maybe not. Our bodies tell us we are uncomfortable when we are outside the range of temperatures at which human beings are safe – say 15-25oC (60-80oF). We experience pain or other discomfort so we do something to get warmer if it’s too cold, or move to somewhere cooler if it’s too hot. But for a Mallard, sitting on ice is not dangerous. They don’t lose much heat through their cold feet, and their feathers keep the rest of their body toasty warm. There’s no reason for them to move or change their situation, so I’m guessing they don’t feel discomfort at all.

2Midtgard, U., The rete tibiotarsale and arterio-venous association in the hind limb of birds: a comparative morphological study on counter-current heat exchange systems, Acta Zoologica, Vol. 62, No. 2, 67-87, 1981.