The Short Answer: Although it looks like a seed or a fruit – reflected in the fact that it’s often called an apple oak gall – this is actually the nursery of an oak gall wasp, probably Amphibolips quercusinanis. Worldwide, there are thousands of species of wasps, and other insects and organisms that create abnormal growths called “galls.” The female oak gall wasp lays a tiny egg inside the central vein of a newly forming oak leaf. Like a biochemical saboteur, the egg commandeers the leaf’s normal development and causes it to form into the round gall shape, with the developing egg protected in the center. As the wasp larva grows over the summer, it feeds on the nutrients the leaf supplies, until it chews it way out and flies away as an adult wasp. You will often see oak galls dried and brown in fall, each with a tiny hole where the adult wasp has exited. 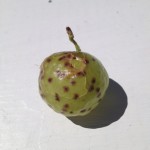 This all sounds like a good deal for the wasps. They lay eggs and the trees protect and nourish them. But if you look at the second picture Michael supplied, you’ll see that this green, early spring gall also has a hole, and because it’s too early in the season for an adult wasp to have emerged, this hole is likely to have been made by one of the many other insects that chew their way inside oak galls and parasitize the gall wasp larvae. The gall wasp larvae parasitizes the tree, and other insects parasitize the wasp larvae.

What goes around, comes around. 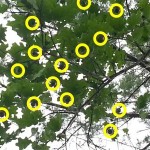 Most sources say the galls don’t hurt trees. Usually, a tree has a handful of apple oak galls, and the loss of a few leaves to the wasps probably doesn’t harm the tree much. But shortly after receiving Michael’s photo, I noticed this tree, covered with galls. This level of parasitism must hurt the tree to some extent, compared to trees without galls. (It’s a little tough to see the galls in the photo, so I circled them in yellow to show how many there are.)

More Information: Sex determination in wasps varies quite a bit, and wasps in the Amphibolips genus have evolved an interesting reproductive scheme. After developing all summer inside galls, the adult wasps, both males and females, emerge in the fall and then mate. Each fertilized female then burrows underground and lays her eggs in roots of trees. In the spring, the eggs hatch underground and feed on the tree roots. What’s odd is that all those larvae are female. When they finish their development these females come out of the ground, climb up oak trees and lay eggs on the leaves. These unfertilized eggs develop into both males and females. In the fall, they climb out of their galls and mate and the cycle starts over.

In this way, the gall wasps have alternating generations, one asexual and then one sexual each year. Because an asexual generation has twice as many egg-laying members as a sexual generation, it allows a population to grow more rapidly. On the other hand, sexual reproduction creates new genetic variation at a much higher rate, leading to greater adaptability of the population. Theoretical modeling suggests that alternating sexual with asexual generations gains some of the benefits of each.