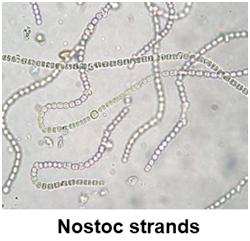 The Short Answer: I’m pretty sure this is a colony of cyanobacteria in the genus Nostoc, probably Nostoc commune. At the microscopic level, Nostoc forms long strands of individual cells that multiply by dividing. Colonies can grow large enough to form mats like the one in your photo. Nostoc commune typically forms leathery ear-shaped colonies. I suspect that what you have is a deteriorating mat of Nostoc commune. Dr. Walter Dodds, an expert on aquatic ecology at the University of Kansas, believes this is Nostoc commune, but suggests that if you want to be sure, you could take a sample, dry it, and send it to a phycologist at a 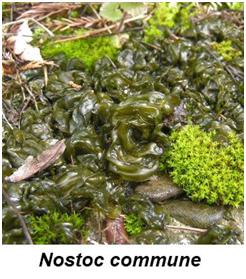 university in the U.K.

Despite the fact that it is phycologists, specialists in algae, who study Nostoc, Nostoc is not actually an algae. Cyanobacteria like Nostoc used to be called blue-green algae, but it’s now known that they are not algae at all, though they perform photosynthesis the way algae and plants do. So although Nostoc looks like some kind of green slime algae, it’s actually some kind of green slime bacteria.

More Information: Dr. Dodds suggested you dry the specimen before mailing it because Nostoc species have an interesting ability to survive drying and then revive once re-wetted. In fact, one laboratory specimen that sat dried in a museum collection for more than a hundred years was revived and grew normally. For all we know, Nostoc can survive hundreds of years dried.

Nostoc has other abilities that help it survive in difficult conditions. It can withstand freezing, for example, and is found in both the Arctic and the Antarctic. Its cells can sometimes be cultured from thin air, suggesting that it is dispersed around the globe on the wind. And it is able to grow in areas of low nitrogen because some of its cells differentiate into “heterocysts” that can fix nitrogen from the air. Earth’s surface atmosphere is nearly 80% nitrogen, and the process of pulling nitrogen out of the air for use by living organisms is called “nitrogen fixation.” The vast majority of animals and plants on earth can’t perform this trick and must rely on fixed nitrogen in their environment. That’s why nitrogen is a key component of fertilizer for plants. Animals get their nitrogen from the plants and animals they consume.

Nostoc, however, is one of the organisms that can fix nitrogen directly, and in some environments, Nostoc is a major source of the fixed nitrogen that eventually sustains all the plants and animals.

So don’t look down on this green slime. It plays a key role in the biological productivity of natural habitats. And it’s probably adding nitrogen to your garden!

Star Jelly: When Nostoc dies and dries and then gets rewetted, it is usually white. Because these white jelly objects seem to show up out of the blue, they are one of the things that have traditionally been called “star jelly” because they were thought to have fallen from the sky. Nostoc is not the only organism that can produce a white jelly, however, and the white jellies called “star jelly” include other substances, including amphibian eggs and slime molds.

Cite this article as: Pelletier, TC. (January 4, 2013). What is this green jelly slime in my garden? Retrieved from http://askanaturalist.com/what-is-this-green-jelly-slime-in-my-garden/ on March 29, 2020.

9 thoughts on “What is this green jelly slime in my garden?”