Why are these birds not-of-a-feather flocking together?

The Short Answer: In the temperate zone of North America, many smaller birds form mixed-species flocks in winter. There are two theories about why birds do this: to improve foraging or to reduce the risk of predation. These benefits are not mutually exclusive, and research suggests that in many cases both benefits are present. The benefits fall mostly to “follower” species, however, and it’s less clear why “leader” species put up with the followers. It’s possible that the leaders don’t lose much by having the followers, maybe gain a little, and would expend too much energy trying to lose their followers. So they mostly ignore them. In that sense, the leaders and followers “get along well.” 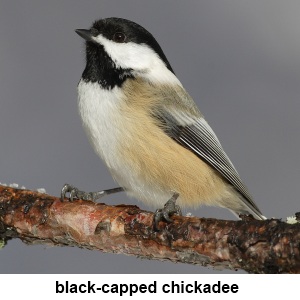 More Information: Most mixed-species flocks in North America have one or more “parid” species as leaders. The parids are birds in the family Paridae, which includes tits, titmice and chickadees. In Ohio, you’d be likely to see the black-capped chickadee (Poecile atricapillus) or the tufted titmouse (Baeolophus bicolor).

Mixed-species flocks are often studied by biologists in what’s called “the small bird in winter paradigm.” The question is “How does a tiny bird like a chickadee or a sparrow live through the winter in places like Ohio?” They can’t just fatten up like many mammals do in preparation for winter. If they did, they’d have a hard time flying and might be easy prey to all kinds of predators, including other birds like the sharp-shinned hawk (Accipiter striatus). But even 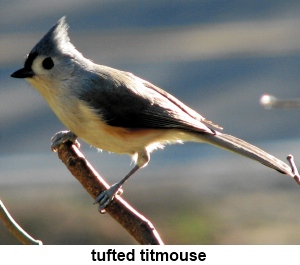 with an insulating layer of feathers, small birds have a large surface area compared to their body size (click here for an explanation), so they must burn energy all night long on cold nights. That means they’ve got to do a lot of foraging every day to replace that energy. And that puts them at risk of predation at a time when the leaves are off the trees and they are much more visible to predators. Small birds in winter walk a tightrope every day: eat enough to get through the night without freezing to death, but don’t spend much time foraging, because that puts you at great risk.

And that’s where mixed-species flocks probably come in. If you can improve your foraging by joining up with other birds, and decrease your risk of predation by hanging out with other birds who are on the lookout for predators, you may greatly improve your odds of surviving as a small bird in winter. 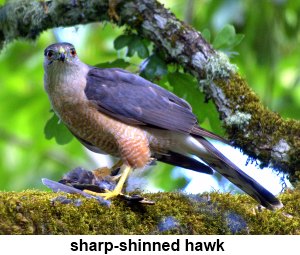 Foraging in a flock with others means you might find food sources that you wouldn’t have found yourself. If you are an insect-eating bird, and you follow around other birds as they forage, you may be able to live off the insects that are exposed by the action of the other birds. The downside of foraging with others, however, is that they compete with you for food. In that sense, the worst foraging partners are members of your own species, because they have the same diet as you. If you forage with birds of other species, however, you may be able to gain some of the benefits of mixed foraging, with less competition. This may explain why follower species are more often insect eaters. One study showed that if birds were given abundant food, they were less likely to join mixed-species flocks. This suggests that they join to improve foraging.

In terms of protection from predation, if you’re in a flock of ten birds, that’s 20 eyes watching for predators, instead of two. Many birds give alarm calls when they see a predator and it’s been shown that other species know exactly what those alarm calls mean. This might mean that you can reduce your own vigilance and spend a higher percentage of your time eating instead of watching for danger. One study showed that nuthatches were less likely to venture out into the open to a bird feeder if they didn’t have chickadees “leading” them, suggesting that in that case, protection from predation may be very important.

Both the “better foraging” and “better protection” benefits of mixed-species flocking seem to be important, and in many instances they probably work together to help small birds survive winter. But mixed-species flocking seems to be even more common in the tropics than in cold weather climates, which suggests that it’s not just about the small bird paradigm. In fact, this phenomenon isn’t limited to birds. It’s been found in reef fish, primates, and even between major groups, for example, sea birds diving to prey on fish driven to the top by dolphins … or even seagulls following fishermen for fish guts.

Follow the Best: It’s not clear why the parids (chickadees and titmice) are so often leaders of mixed-flocks. But one interesting study on the prey of sharp-shinned hawks showed that they catch very few chickadees or titmice, even though they were among the most common birds in the study area. The authors speculated that the foraging style of chickadees and titmice didn’t bring them out into the open very often and therefore they weren’t as susceptible to predation as some of the other very small birds (sparrows, wrens, nuthatches, etc.). But maybe the parids are the tiny ninjas of the bird world with self-defense or predation avoidance super powers, which is why other birds – often much larger birds – follow them around … and why the sharp-shins leave them alone!

Goodale, E. and Beauchamp, G. “The relationship between leadership and gregariousness in mixed-species bird flocks.” Journal of Avian Biology 41 (2010):99-103.

How does the ocean deal with garbage?