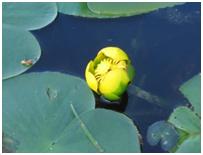 The Short Answer: This is the rhizome of the yellow pond lily (Nuphar variegata), also known as spadderdock, spatterdock or cow lily. A rhizome is a stem that grows at or below ground level, usually horizontally. Typically, rhizomes send shoots up and roots down. Irises have rhizomes, and ginger is an edible rhizome, to give two examples. The rhizomes of spadderdock are usually buried or semi-buried in the muck at the bottom of slow moving water in marshes, lakes, ponds, rivers, and streams in the Northern Hemisphere. Although, as you observed, they can be dislodged and then tend to float. The rhizome is edible, and Native Americans cooked and ate it the way we might eat a potato, or dried and ground it to create flour. Like a potato, it is a storage organ for the plant and is loaded with starch.

More Information: There are a number of closely related species in the genus Nuphar, including this one, N. variegata, as well as N. x rubrodisca, N. microphylla, and N. advena. All have similar yellow flowers, with some variation in size and shape of the leaves. In the 1950s it was suggested that 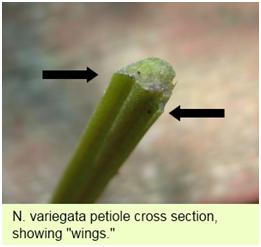 they are really a single, highly variable species, but according to Dr. Donald J. Padgett, Professor and Chair of Biology at Bridgewater State University in Bridgewater, Massachusetts, who published the first scientific monograph on the genus in 2007, the lumping of Nuphar species has not been widely accepted, and most experts consider the species listed above to be distinct.

N. variegata is the more northern of the species, and the one most likely to be found in Wisconsin, although N. advena occasionally sneaks into the north. Dr. Padgett suggests that the easiest way to tell these two apart is to look at the petioles, the leaf stalks. “N. variegata has ‘winged’ petioles,” he points out, “The leaf stalks are flattened on top and flared/extend out along the sides creating the so-called wings. The inside of the yellow petal-like sepals are dark purple, too.” 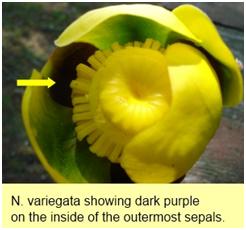 “A similar species is N. advena, which has round petioles (in cross section) and the sepals are yellow/green inside. Another species is the diminutive N. microphylla. This species is very small (leaves just a few inches long, flowers half the size of the others) and has a dark red center in the flower. Its rhizomes are the size of pencils, rather than logs! This species naturally hybridizes with N. variegata to yield N. x rubrodisca.”

The yellow pond lily begins to flower in the spring and continues throughout the summer, so if you’re kayaking in that area again any time soon, take a moment to look at the leaf stems and/or the flowers and confirm for us that it’s N. variegata that’s leaving its large rhizomes floating around.

Beaver Food: People aren’t the only ones who like to eat cow lily rhizomes. Beavers love them, too.

Thank you to Gary Fewless, Herbarium Curator at the Cofrin Center for Biodiversity at the University of Wisconsin-Green Bay for identifying N. variegata from Jen’s photo.

Dr. Padgett’s extensive monograph can be found at: http://webhost.bridgew.edu/dpadgett/nuphar%20monograph.pdf.

2 thoughts on “What is this Strange Root?”