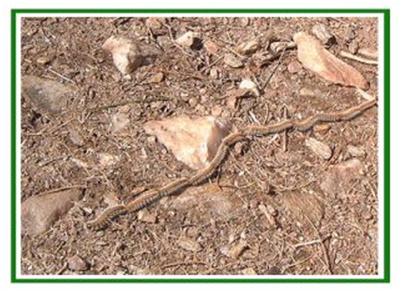 would require a different answer in each case. With mice, hugging close to objects is a probably a simple way to program their behavior to avoid open spaces, where they are in danger from predators. In mice, and many other animals, thigmotactic behavior is an immediate response to fear or anxiety, a fact that is used by medical researchers when testing anti-anxiety medications.

The evolutionary value of the thigmotastic behavior that leads to processions in some social caterpillars is an interesting question. It occurs primarily in caterpillars that nest together, and may help them find their way to and from feeding sites and then back to their nest. Some species also form long processions to pupating sites. Most of these caterpillars lay down both a silk trail and a scent trail. The followers are touching the caterpillar in front of them and following the scent trail. The bag-shelter moth in Australia uses only thigmotaxis, and one experiment showed that the “hairs” that stand up on the rear end of the caterpillars are key. If you remove the hairs at the front of the caterpillars, they can still follow each other. But if you remove the hairs at the back, the procession immediately breaks down. So the thigmotastic program seems to be “If you are in touch with the hairs of the caterpillar in front of you, keep moving forward.” You can easily get caterpillars to follow around any object simply by attaching the hairs from the back of a caterpillar. When a caterpillar loses touch with the one in front of it, it waves its head back and forth trying to regain contact.

So I guess the answer is that thigmotaxis evolves when a somewhat fixed behavior in response to physical objects would result in greater safety, easier access to food supplies, finding mates, etc.

Why are these mallard males beating up this female?