The Short Answer: Very interesting question, and unfortunately, there is very little in the scientific literature about amphibians and what is called “dermatophagy.” The assumption is that frogs and toads (as well as salamanders, which also practice dermatophagy) are recovering nutrients and protein from their skin.  Basically, the shed skin is good food.

While both amphibians and reptiles shed their skin, amphibians generally shed more frequently than reptiles.  Some amphibians even shed their skin every day. Most amphibians “breathe” through their skin when in water, and it’s possible that frequent renewal of the skin may be adaptation that keeps the skin from hardening and becoming less permeable to oxygen. But shedding skin frequently could result in a loss of nutrients if the frogs and toads didn’t recover the nutrients by eating and digesting their own skin.

Another possible reason is that leaving shed skins around may alert predators to their presence. Frogs and toads may eat their own skin to cover their tracks.  It could well be, of course, that both factors – nutrition and stealth – are important.  But aside from a study published in 1993 that surveyed zoos for reports of amphibians and reptiles ingesting their own skin, I can find very little research on this issue.  That paper mentions the two possible reasons I mentioned above.  As far as I can tell, no one has published the results of any real studies on this reason for this behavior question.

Tell your young scientist that the answer is all theirs to find!

Here is a youtube video of an American toad shedding and eating its skin: 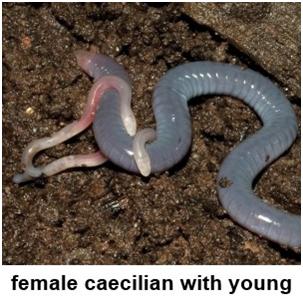 More Information: Most people can name frogs, toads and salamanders as amphibians. But there is another group of less well known amphibians called caecilians. Most of the world’s 200 or so species of caecilians live underground in the tropics, so most people have never seen one. They have no legs (or rudimentary legs in some species), so the smallest species resemble worms, and the largest (about 1.5 m, 5 feet) resemble snakes. Some caecilians have evolved an interesting way to feed their young. In these species, the female produces nutrients in her skin, which is constantly being peeled off an eaten by her offspring. This serves as an alternative to the milk produced by female mammals.

Cite this article as: Pelletier, TC. (May 27, 2013). Why do frogs and toads eat their shed skin? Retrieved from http://askanaturalist.com/why-do-frogs-and-toads-eat-their-shed-skin/ on January 17, 2020.

4 thoughts on “Why do frogs and toads eat their shed skin?”