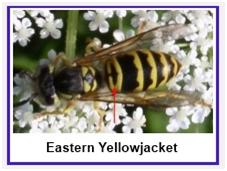 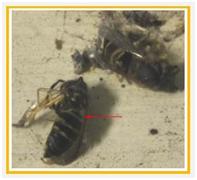 The Not So Short Answer: These are almost certainly the Eastern Yellowjacket, Vespula maculifrons, one of our most common yellowjackets, and the smallest yellowjacket (about 0.5 inches, 1.3 cm) in North America. I zoomed in on one part of your photo to show the characteristic shape of the black coloration on the first abdominal segment. According to Sam Droege, a biologist at the Patuxent Wildlife Research Center, this typically takes a “boat anchor shape” in the Eastern Yellow Jacket. The two other common yellowjackets in Georgia would be the introduced German Yellowjacket (Vespula germanica – also called German wasp), which is slightly larger and has more of a diamond shape on the first abdominal segment, and the Southern Yellowjacket (Vespula squamosa), which usually has a connecting line in the first abdominal segment, and has two lengthwise yellow stripes on the th 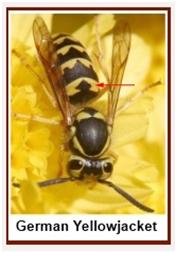 As to why you have Eastern yellowjackets in your garage, that’s something of a puzzle. Y 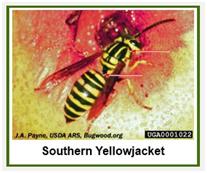 ellowjacket colonies die out each year, with only newly mated queens living over the winter. But September is a little early for a colony in Georgia to be calling it quits for the season. Some yellowjacket species nest readily in houses and garages, but the Eastern Yellowjacket generally doesn’t. They build paper nests in holes excavated underground. Mr. Droege wonders if you have a nest right near your house or garage. “This time of year, the colonies are at their peak but may be running low on available food. They may simply be moving into the house and garage while searching for yummy things (likely there is something that smells attractive in both places).  They then get disoriented and end up trying to get out near the window.

“Inside they won’t sting unless you accidentally sit on one…which can happen as they become weak and may end up crawling on the floor or on a chair or bed. Best bet is to go out in late afternoon when there is a strong sun and take a stroll around the yard.  There should be a parade of yellowjackets going in and out of the nest and the light at that time of day makes them stand out. If you feel you need to get rid of the colony, fill a gallon jug with water add a large amount of dishwashing soap, go out at night, dump it down the hole, put a rock on top and that should do it.  No need for dumping gasoline or poison down the hole during the day, which often just ends up with people getting stung.”

Given gasoline’s potential as a groundwater pollutant, it should never be dumped in the ground, and if you are allergic to bee stings, you should hire a professional to remove the colony, of course, but otherwise, you might just enjoy watching the yellowjackets coming and going, knowing that their days are numbered. And they don’t generally nest in the same place the next year, so whether you destroy the nest or not, they’ll be gone soon. (Although apparently, Southern Yellowjacket queens will sometimes take over an empty Eastern Yellowjacket nest.)

More Information: This question spurred me to look up something I’ve always wondered about: how to tell a bee from a wasp and how to tell a wasp from a hornet. So here’s the story:

Bees – generally plump and furry looking. Their legs usually don’t show when they’re flying. Examples are the familiar honeybees and bumblebees. Their food is nectar from flowers.

Wasps – generally thinner, without the furry look. Usually have two legs dangling when flying. Examples include yellowjackets and paper wasps. Most wasps are predatory or parasitic. Yellowjackets also go for fruit and human food, especially sugary drinks and meat.

The Interesting Science: What do ants have to do with wasps? Well, funny you should ask, because ants are really a type of wasp. As the phylogeny (evolutionary history) below shows, the insect order Hymenoptera includes two Suborders, the Symphyta (sawflies) and the Apocrita (wasps). Within the Apocrita, there are the Parasitica, which includes a vast number of parasitic wasps, and the group of more interest to us right now, the Aculeata. If we go further into the Aculeata we find the Superfamily Apoidea (which includes the familiar honeybee, bumblebee and various bee-like wasps), the Superfamily Chrysidoidea (other wasps), and the Vespoidea. The Vespoidea includes the Family Vespidae, in which we find yellowjackets, paper wasps, and some other common wasps. And also within the Vespoidea is a very important family, the Formicidae – the ants.

Under a system of naming that takes evolutionary history into account, ants would be a variety of wasp – a very successful offshoot of the Vespoidea wasp lineage that includes those yellowjackets.

Thanks: My thanks to Sam Droege for his generous help. Mr. Droege is a researcher at the Patuxent Wildlife Research Station, operated by the United States Geological Survey, which despite the “Geological” in its name, is the federal government’s primary agency for wildlife research.

What is this orange backed spider?

Stung while in river