Who Would Win: Lion or Moose?

The Short Answer: You are both right. (Don’t you hate that?!)

More Explanation: For many years, my son and I have had a running argument as to who would win in a battle: a Tyrannosaurus rex or Spiderman. I contend that a T-rex would simply crunch Spiderman with its nine inch teeth. My son clings to the preposterous claim that Spiderman would run around T-rex, wrapping up the dinosaur’s legs with spidey-silk, causing the T-rex to fall clumsily forward onto its face. And T-rex, with its tiny, useless arms, would be unable to catch itself as it fell. That sounds plausible … except that T-rex would simply chomp Spiderman before he could run around with his spidey-silk! 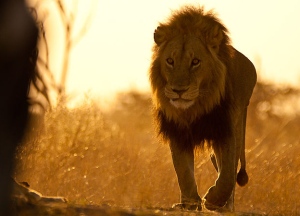 Your question is similar, in that we aren’t ever likely to get any definitive evidence.  Lions (Panthera leo) and moose (Alces alces) don’t overlap in range, since lions live in Africa and some parts of southern Asia, and moose live in the northern half of North America, and northern regions of Europe and Asia.  (If only we could talk to some prehistoric Europeans or North Americans, we might get an answer, since there were African lions in Europe up until about 2,000 years ago and North America had its own similar species until about 13,000 years ago.)

Because they’re big, charismatic, and symbolic, as well as being an apex predator, lions have received quite a bit research attention over the years. By following lions around and recording exactly who they chase and who they kill, we know that lions truly are “The King of Beasts.” A tiger (Panthera tigris) may be the single largest and most dangerous predator on land, but a pride of lions can kill anything, and even solitary lions can bring down most of the large game in their habitats. Despite the often repeated claim that only female lions hunt, both sexes hunt in groups and individually. 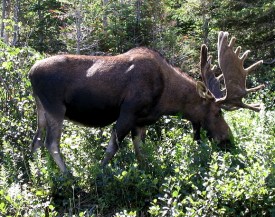 should be an optimal size prey where the extra energy expended and the extra danger risked in hunting a larger animal is balanced by the larger prize of more meat. And this seems to be the case. When given the choice, lions don’t necessarily go for the most common prey, and can often be seen walking right past smaller animals that seem like easy pickings. Instead, they often target prey that are about 250 kg (550 pounds). A female moose is very close to that sweet spot.

Lions also prefer slower prey over faster. Like most big cats, lions are capable of very fast spurts of speed for a short distance, but speedier prey like impala and zebra can often simply outrun a lion. Slower animals such as African buffalo are less likely to outrun a lion and therefore will turn and fight, using horns and hoofs.

Given the fact that a female moose is not particularly fleet, and does not sport the impressive antlers that male moose do, I think it’s pretty reasonable to assume that if lions lived where moose do, female moose and moose calves would be on the menu regularly.

But I suspect your argument is really about a battle between a solitary lion and a male, antlered moose. However, even then, I don’t think there’s much question that a solitary lion could kill a full-grown bull moose. When I asked Matt Hayward, Regional Ecologist for the Australian Wildlife Conservancy, who has studied lion predatory behavior extensively in Africa, for his opinion, here’s what he said, “Lion would love moose. The antlers of moose would pose little risk to lions given they are not always present, often covered in velvet and not overly sharp.  Individual lions regularly kill buffalo and giraffe that are as large or larger than even a male moose.  A moose would be a snack.”

One final piece of evidence is that the mountain lion (Puma concolor), which overlaps the range of moose in North America, regularly kills moose. The animals killed are almost entirely calves and juveniles, but adult male mountain lions do occasionally kill adult moose. If a mountain lion, which is a solitary hunter and is about one third the size of an African lion, can kill an adult moose, it certainly seems likely that a solitary African lion could also do so.

Everything I’ve said so far suggests that you should win the argument. But … and this is a large but … here’s where the scale tips back in favor of your friend. Even as one of the world’s most ferocious predators, lions are most often failures. All predators fail on most of their hunts, and Dr. Hayward points out that lions are particularly unsuccessful. “Lions are notoriously hopeless hunters and only catch prey in 1 out of 10 hunts on average.” Of course you don’t want to be the unlucky #10, but the truth is that most of the time, lion prey outrun the lion, or fight off the attack or otherwise end up shaking but alive at the end. And there’s little reason to assume the same wouldn’t be true of moose.

So chances are that in most encounters between a moose and a lion, the moose would walk away at the end and the lion would sulk hungrily, plotting its next nine attacks. That’s why my short answer was “You’re both right.”

And now I’ve probably given you both more ammunition. Have fun.

These are not for the faint of heart, but here are links to a couple of videos of zebras defeating lions, including one where a zebra nearly drowned a lioness, further evidence that even large and ferocious predators don’t always win:

Bright yellow mold – Or is it dog vomit?