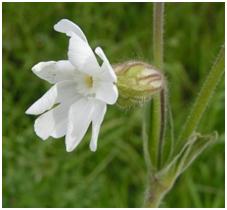 The Short Answer: Thanks to Deb Thompson at mywildflowers.com, a site that specializes in the wildflowers of Pennsylvania, for quickly identifying this as a white campion flower (Silene latifolia). The flower is more easily identified in side view, as it has a distinctive bulb as shown in this photo to the right. White campion is native to Eurasia and northern Africa, but it was introduced to the U.S. about 200 years ago and is now fairly widespread across northern U.S. and southern Canada. 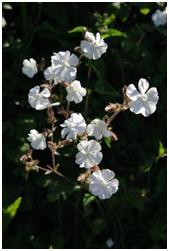 More Information: While white campion is well controlled in its native range, it’s considered to be an invasive plant in the North America. One theory of why a plant species might become invasive outside its original range is that the insect and disease species that “prey” on it in its original range are not present in the introduced range. In Europe, white campion is attacked by a moth (Hadena bicruris) whose caterpillars eat white campion seeds. It’s also subject to aphids and other insects and the fungus Microbotryum violaceum. These predators are rare or non-existent in the U.S. White campion flowers in Europe are 17 times more likely to be damaged by predators than in the U.S.

A study showed that in the 200 years or so since white campion was introduced to North America, the plant has undergone evolution in response to this relaxation of predation. Plants in the U.S. have fewer spines, thinner seed bulbs and produce more seeds. It appears that the balance between protection and production has been tipped in favor of production in U.S. plants, supporting the idea that plants become invasive in a new range if their predators are absent.

Trivia: In England, white campion is sometime called Grave Flower or Flower of the Dead because it often grows in graveyards.

One thought on “White campion flower”