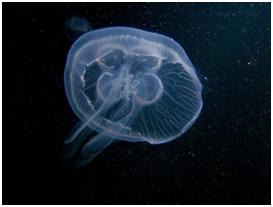 The Short Answer: What you saw are floating medusae of the moon jelly (Aurelia aurita), one of the most common jellyfish in the world. They like protected waterways, and are tolerant of the wide range of salinity and temperature that you often find in harbors and bays. They also become larger and more visible in the summer, so they are a common sight in city harbors around the globe.

Many species of jellyfish, including moon jellies, have increased in the last decade. Factors that probably favor moon jellies and other species include manmade objects in the water, warmer temperatures, overfishing, and fertilizer runoff. Here’s a video from Boston Harbor in summer 2010 that shows the jellyfish:

The Moon Jelly – One of nature’s most adaptable creatures

The list above makes it clear that there are man-made changes going on that favor moon jellies. But give some credit to the jellyfish themselves for being able to exploit those changes. They can eat almost anything, from floating organic matter to copepods to fish larvae. Probably because they sting and are overwhelmingly made of water, only a few types of fish will bother to eat them. They are preyed on by sea turtles, but there are far fewer of those than there used to be.

Finally, moon jellies have one of the most complicated and adaptable systems of reproduction in the animal world. They have several ways of reproducing asexually, and a couple of pathways of sexual reproduction. This gives them enormous potential to increase population size rapidly and with great flexibility based on local conditions. Give these guys an opening and they will take advantage quickly. That’s why they are found all over the world and that’s why we are seeing more and more of them.

As interesting and beautiful as they are, the increase in moon jellies around the world is creating problems. They do sting and are therefore a nuisance to swimmers. When there are lots of them, they can clog water intake pipes, and gum up and weigh down fishing nets. And, as mentioned above, they may be delaying the recovery of overfished resources.

For Your Viewing Pleasure:

This page shows the stages from polyp to floating medusa for Aurelia. Click on next. The first five slides are moon jellies.

This youtube video, with rather overly dramatic sound track, shows the stages as well:

Vagelli, A. (2007). New observations on the asexual reproduction of Aurelia aurita (Cnidaria, Scyphozoa) with comments on its life cycle and adaptive significance. Invertebrate Zoology, 4(2): 111-127.

Who is this goose’s mate?

What is this strange object floating in our lake?