What time of year can I see monarchs in Mexico?

The Short Answer: According to our friends at the Texas Butterfly Ranch, a blog dedicated to monarch butterflies (Danaus plexippus), officials at the Monarch sanctuary at El Rosario in Mexico have announced that the sanctuary will open to tourists for this season on November 12, 2011. As I write this in mid October, monarchs have begun to show up in Mexico and in the next few weeks millions will arrive at a few specific forest groves, where they will settle down to hibernate in large trees (primarily the Sacred fir, Abies religiosa, also known as Oyamel tree) until March and April when they will begin stirring to head north.

So if you want to see monarchs hibernating in Mexico, you should plan to make your trip between mid-November and mid-March. 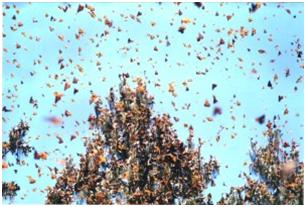 More Information: You also asked what time of year they hatch into butterflies. Monarchs in North America have one of the most amazing yearly cycles of any creature on earth. There are two largely separate populations, one east of the Rockies and one to the west. Monarchs to the west of the Rockies spend the winter in a couple of locations in southern California. The more famous monarchs of the east migrate to the Mariposa Monarca Biosphere Reserve in central Mexico. After resting from mid-November to mid-March, the butterflies become active and begin mating before setting off north for the United States.

By the end of April, females have begun laying eggs on various species of milkweed plants in southern U.S. states. When those eggs hatch into caterpillars, they feed on milkweed and eventually form a chrysalis and then metamorphose into butterflies. Those butterflies then set out north, traveling throughout the United States, laying eggs which hatch into caterpillars that eventually turn into butterflies that take yet another hopscotch north. As many as four generations can take place in a single year, with the result that the final generation of monarchs can extend into southern Canada.

Most monarchs hatch, grow, breed, and die in the United States or Canada. It is only the final generation of each year that stores up energy to make the long flight back to Mexico, which can be over 4,000 km (2,500 miles). 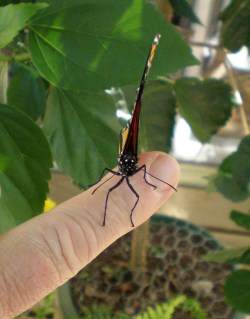 So the answer to your question is that they hatch from April to September. Charles, an AskaNaturalist.com reader from Kansas, recently reported that chrysalises on his deck metamorphosed in late September. His butterflies (one is shown here) will probably arrive in Mexico soon, along with tens of millions of other monarchs. Pretty soon they’ll all be waiting for you to visit them at Mariposa Monarca Biosphere Reserve. Let us know how it goes. Bring back pictures!

For those readers who can’t get to Mexico to see the monarchs with Sheila, here are a few videos:

This site has great information on monarchs, including a map that shows where the migration is right now: http://www.learner.org/jnorth/monarch/

What is this orange backed spider?

Who is this green frog and beetle?

What are these jelly blobs on my car?