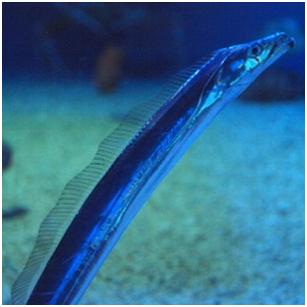 The Short Answer: Eric Hilton of the Fisheries Science Laboratory at the Virginia Institute of Marine Science, quickly identified this as an Atlantic cutlassfish (Trichiurus lepturus), and Cathy confirmed that this indeed matched the fish she caught. The fish is also called the largehead hairtail. Despite the “Atlantic” in its North American name, it is found in tropical, subtropical, and temperate coastal waters around the world and in some places is one of the most common coastal fish. The largest Atlantic cutlassfish recorded was 5 kg (about 11 pounds), but 1-2 kg (2-4 pounds) is more typical. Atlantic cutlassfish eat krill and other crustaceans and fish. Though it seems eel-like, it is not a true eel and is a member of the large order Perciformes, the perch-like fish, which includes perch, freshwater sunfish, as well as cichlids. True eels are members of the order Anguilliformes.

For more information about the cutlassfish and more pictures, go to: http://www.eol.org/pages/219637.

Thanks also to Shirl Dressler at the Virginia Department of Game and Inland Fisheries.