What is this black, yellow, and white bird? 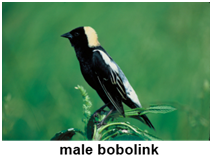 The Short Answer: That sounds like a bobolink (Dolichonyx oryzivorus) to me. They often sit on fenceposts at the edge of farm fields and sing. Here’s a link to a youtube video of a bobolink singing:

(Follow-up: The reader confirmed that this picture and song matched what she had seen, so I think we have a match.)

More Information: Bobolink populations have been shrinking in the northeastern U.S., probably due to habitat loss. Bobolinks are grassland birds and as open areas in the northeast are converted to housing developments and other uses, there is less habitat for bobolink and other grassland creatures. Farms and hayfields could provide some habitat for grassland animals like bobolink, but as ground nesters, bobolink have to contend with challenges such as agricultural chemicals, grazing by livestock, and harvesting of crops and hay. Any of these disruptions can lead to nest failure. Studies have shown, however, that with a little planning, we can have pastures and hay and bobolinks, too. For example, by waiting to mow hayfields until after the critical nesting period from mid-May to early July, nest success is greatly increased.

Carnivorous Cows: Some farm animals that we don’t think of as predators – cows, for example – will actually eat bobolink chicks out of a ground nest.

Who made mysterious rectangular tree holes?

What is this Eel-Like Fish From India?

Why did these coyotes attack?