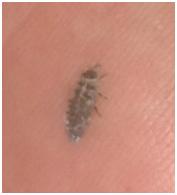 The tree looks very healthy apart from the white things. It’s had plenty of rain this year, and it’s still getting new growth on it. The tree is about 60 years old, from what I can gather. We live in a village, and larch trees in gardens around here are rare. Do you have any idea what these white things are? And, if they are some kind of bug, will they be rid of when the tree dies in the winter? We’re worried about other trees as well as wheat and barley fields nearby.

We also took a picture of this creature, which seems to be associated with the white spots.

The Short Answer: The white dots are the egg cases of adelgids, probably the larch adelgid, (Adelges laricis). Adelgids are insects related to aphids. The egg cases are made of a kind of wax secreted by the insects for protection. They have a “wooly” appearance, which leads to them often being called “wooly adelgids.” There are approximately 50 species, all native to the northern hemisphere. Adelgids are specialized to feed on conifer trees, and in some cases, more on this below, they can kill the trees. The good news is that the half centimeter or so (3/8 inch) insect pictured in your palm was identified by Abby Parker from BugGuide.com as the larvae of a lady bug, which is almost certainly there because it is feeding on the adelgids – and protecting your tree. 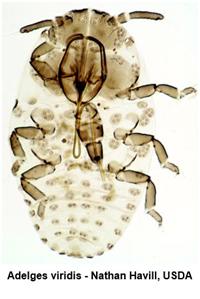 Is Angie’s Tree Doomed? In our email exchange, Angie offered that she did a little research on her own and read about the wooly adelgids that are decimating eastern hemlocks (Tsuga canadensis) in the United States. This made her justifiably nervous about her tree. Entomologist Christine Tilbury of
British Forestry Commission told me “Two adelgid species are known to occur on larch in the UK, Adelges laricis and Adelges viridis. A. laricis is common and widespread and the more damaging of the two. A. viridis, which is also widespread but occurs less frequently, causes no serious damage. A. laricis can be a serious pest of European larch (Larix decidua), when small colonies build up over several years into vast numbers. The foliage takes on a bluish-white appearance with the woolly secretion and needles are bent or distorted. Copious honeydew produced by the Adelgids becomes blackened with sooty moulds. Later needles turn purplish brown and drop and shoots die back. On young trees sustained attack can lead to shoot dieback and bud failure which sometimes weakens and kills the whole tree, a condition known as Larch dieback. There is no recommended treatment for large trees. On small trees of high value the overwintering A.laricis nymphs, which do not secrete any protective wax, may be sprayed with a permitted contact insecticide, applied on a suitably mild and calm day between November and February. No biological controls are currently available.” 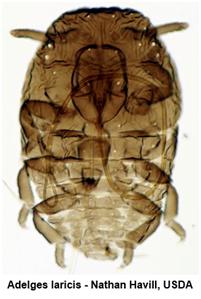 So in answering the question about the risk to your tree, it seems that the answer hinges on whether the maker of your white dots is Adelges laricis or Adelges viridis.

How can you tell?

The adelgids are very small, on about 1 mm (less than a 16th of an inch). When they hatch out of their wooly nurseries, they are called “crawlers.” If you could find a few crawlers on your tree, an entomologist could put them under a microscope and tell you which species you have (see these slides, thanks to Nathan Havill of the USDA for the pictures). Short of that, however, Christine Tilbury says there are a couple clues. “A. laricis is the most common adelgid on larch in Britain. Heavy infestations with much bluish-white waxy-wool will be due to A. laricis. Lighter infestations where there is less wool are best distinguished by examination of the needles. A. viridis causes a characteristic ‘elbow-like’ double kink distortion. There is localised needle yellowing around the site of feeding but affected needles are not killed. A. laricis also causes needle distortion but the needles are curled and twisted rather than kinked, needles turn brown and fall and there is shoot dieback. Shoots colonised by A. laricis may also feel sticky to the touch due to the production of honeydew.”

By the way, the hemlock wooly adelgid (Adelges tsugae) that is such a problem in the United States has not been found in England yet. Most likely it will get there eventually. If we’re lucky, hemlocks in the UK may be immune. Most hemlocks in the UK are western hemlock (Tsuga heterophylla), which are native to the west coast of North America. In North America, they seem to be immune to the adelgid that is decimating eastern hemlock.

The Strange Life of Adelgids: Adelgids have one of the most complicated life cycles you will find in the animal kingdom. All of the adelgid species have as their primary host one of the 35 or so species of spruce trees (genus Picea) and a secondary host that is another conifer, such as larch, hemlock, pine or fir. You’ll need a scorecard, but let me see if I can run through this quickly. It’s a cycle, so there’s no real beginning, but let’s start with the tiny winged adults that fly from the secondary host to the primary spruce tree host. Once they land on a spruce tree, the adelgids lay eggs and die, sheltering the eggs with their wings. The eggs hatch into males and females that lack wings, which go through four developmental “instars” before becoming adults that mate. The mated females lay a single large egg, which hatches into a wingless female. The female feeds and then induces the spruce tree to create a “gall,” which resembles a small cone. The gall is destined to become an adelgid nursery. In the spring, the female, after going through several instars, lays a clutch of eggs that hatch and move into and are enveloped by the growing gall. These larvae feed on the gall and go through several more instars. By mid-summer, the gall dries out and opens. The adelgids emerge and molt into winged adults, which migrate to the secondary host, a non-spruce conifer.

Got all that? Good. But stay tuned. There’s more.

Phew! And we thought human life was complicated.

It’s not really important to remember all that, of course. It’s just a fascinating way for a tiny creature to live. By the way, because the hemlock wooly adelgid’s spruce tree host is not found in the United States, it simply reproduces through all female generations on its secondary host, the eastern hemlock. When winged adults form, they fly away, but unless they make it to Japan, they die without ever completing the cycle. Even without that part of the cycle, the hemlock wooly adelgid has destroyed large swaths of Eastern hemlock.

Thanks to: Nathan Havill of the United States Department of Agriculture for help on the life cycle of adelgids. And to Christine Tilbury of the British Forestry Commission for all her assistance.

Cite this article as: Pelletier, TC. (November 6, 2013). What are these white spots on my larch tree? Retrieved from http://askanaturalist.com/what-are-these-white-spots-on-my-larch-tree/ on July 3, 2020.

2 thoughts on “What are these white spots on my larch tree?”